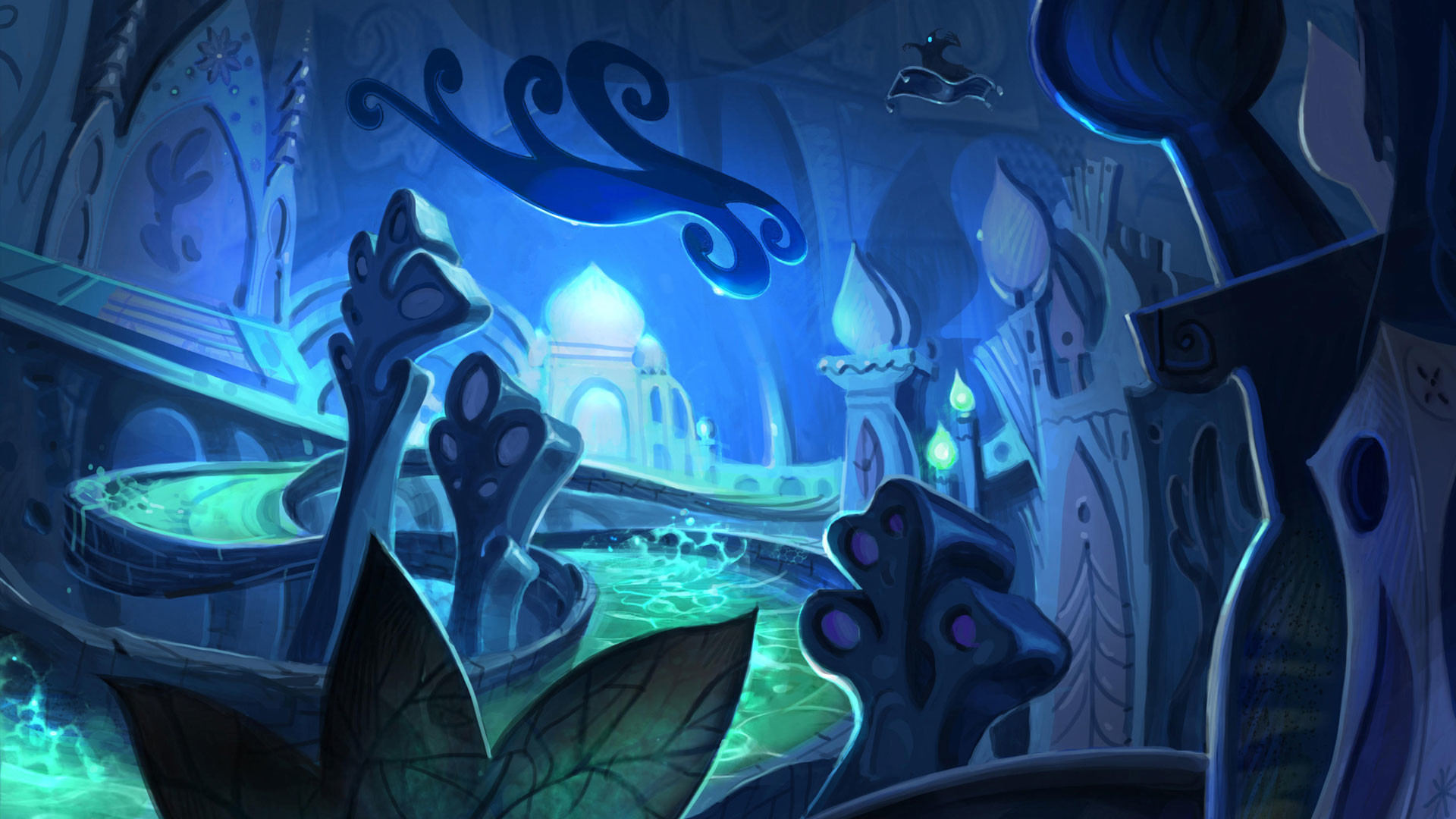 on the official website of Gary Glover, the conceptual artist of Epic Mickey, I found the Concept Art of Mean Street complete, and I think the character choices very peculiar, can someone tell me which character is the one that looks like a monkey or a mouse? or What happened to this Pinocchio? 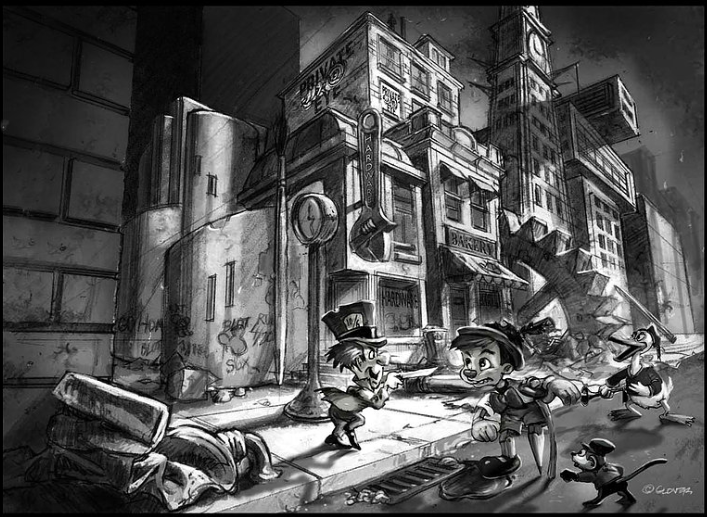 I also thought of the name Mecha Doctor, but it sounds very futuristic.

well, I also imagined an Animatronic Scrooge, but I still do not know what his role would be.

And all from projectors

not so much, because as no one knew of the existence of Autotopia in the first game, it really could be hidden there.

not so much, because as no one knew of the existence of Autotopia in the first game, it really could be hidden there.

well, the first time I saw him, it was in a trailer for Epic Mickey, but I thought he was just a common enemy in the game.

but a while later, I read an old comic that celebrated Walt Disney's 50th birthday, and Oswald was mentioned there, in addition to a picture of him mounted on a horse similar to Horace, and that's how I met him.

and before that, I saw him in a Christmas cartoon by Walter Lantz, but since the characters in this cartoon were parodies of celebrities, I thought he was a parody of Mickey.

One of the things that fascinated me most about the scrapped contents was the Beanstalk-Factory, and recently seeing one of Epic Mickey's trailers, I saw an area with clouds and Mickey paints a tiny Mean Street in that area.

would be a possible unfinished area of Beanstalk-Factory? 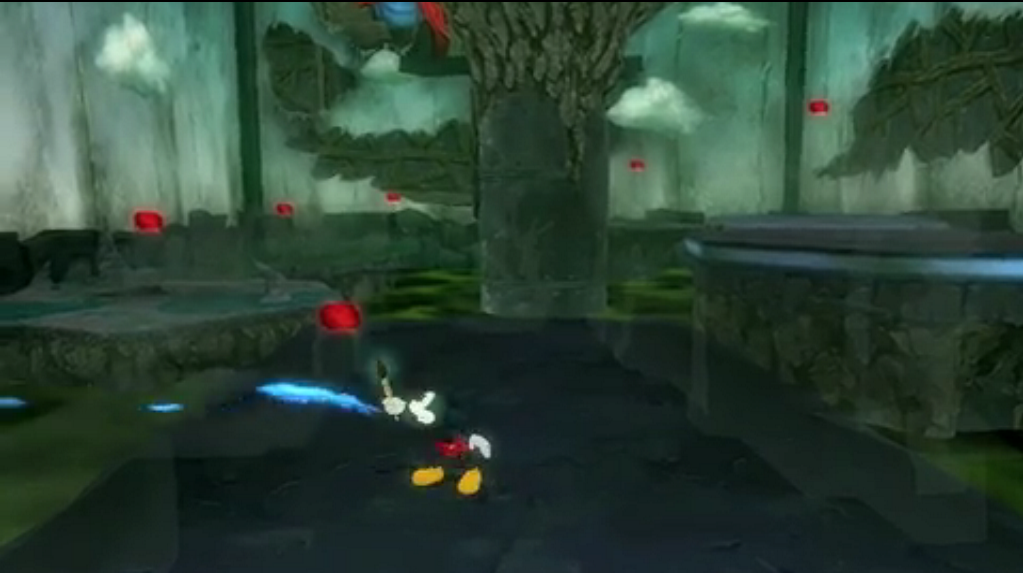 A reply to Hart New Bob
2

in Dahl's book, there really is a Gremlin Girl.

I believe they have not included her in the game because they are too lazy to create a model for her because she is the only one different Gremlin, and they preferred to use the same similar models for all Gremlins 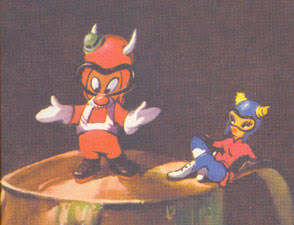 Well, I imagined a new story, new levels, new characters and new projector films, for an Epic Mickey 3. After the end of Epic Mickey 2, the Petes and Prescott have found a small part of Shadow Blot left, that part looks like it's still alive, so they gurdam it in a jar. In the Med Doctor's lab, they try to create a kind of controllable clone, using that part of Shadow Blot left with animatronics parts. In creating this clone, they name him Glover Blot, as he is a frightening figure wearing a hooded black cloak, and a baton with a glove at the end(inspired by a figure of early concept arts) and for some reason he has the power to freeze time, the Petes and Prescott realize that they can not control him, and he freezes all Wasteland, with his last forces, Oswald asks Gus to seek Mickey's help, and now it's up to him to restore Wasteland again. now the game can be played with up to four players, the first player, Mickey, the second, Oswald, and the third and fourth as Donald Black Feet and Dippy Dawg, old versions of Donald and Goofy that went to Wasteland, and now are friends of Oswald, Donald plays a bugle as an attack, apparently he plays so badly that he drives them all away, and he can also use a fishing rod to attack and get hooked in certain areas, the only skill I imagined for Dippy is running in the air during the jump(similar to Yosh). The camera does not divide as in Epic Mickey 2, now the camera is similar to Ratchet and Clank all 4 one, but all old mechanics remain, and a special double movement can be used now. The new levels in Wasteland are, Wanderland, based on the deleted Wonderland, the areas that would have been Toggle Woods, based on the concept art of Tulgey Woods, Hedge Maze, in which the player would have the help of Julius the Cat, and Palace of Cards, a castle made entirely of cards, at that level would have many elements, characters and scenarios from the canceled version of Alice in Wonderland 1939, along with characters from the series Alice's Comedies, projectors: Alice's Spooky Adventure and Alice in Wondeland. Thinner Mountain, based on Splash Montain, in this area would appear characters from the canceled film, King of the Elves, to help, projectors: The Tortoise and the Hare and Song of the South(cartoon scenes). Beanstalk-Factory, based on the same deleted level, in that area would appear the giant girl of the canceled movie, Gigantic, to help, and would have King of the Giants from Giantland as boss, projectors: Giantland and Brave Little Taylor. Tragic Island, based on Treasure Island and Jug Pump, projectors: Tugboat Mickey and Hawiian Holyday. Bearville, projectors: Bongo and Alice Solves the Puzzle. Broken-Toyland, in that area would feature characters from the canceled movie, My Peoples, to help, projectors: Broken Toys and Fantasia 2000 Tin Soldier. And The Inferno, based on the film of the same name, which was canceled, in that movie would have Goofy as Dante and Jiminy as Virgil, and Goofy Dante appears in that area, he says he was already a good friend of Jiminy, and he needs help free the boys who were transformed into donkeys in Pinocchio, who were imprisoned by the Devils from Hellbells, projectors: Hellbells and Goddess of Spring. That's just an initial idea, but you're welcome to come up with suggestions ;)