Abe, or the Automatic Branch Engineer, is the robotic caretaker of the Train Tunnels in Epic Mickey 2: The Power of Two, created by Gremlin Prescott. When Mickey first meets him, he will say that the earthquakes damaged him and the dioramas badly.

If Mickey repairs 2/3 dioramas (or all the dioramas), Abe is restored. He thanks the heroes and tells them to ask him if they need information. When Mickey asks why Prescott was in the Train Tunnels, Abe first says that Prescott created him around the same time the Train Tunnels were created. He proceeds to tell them that Prescott was working on something big and important because the Gremlin came and grabbed a lot of spare parts. When Abe asked him why, Prescott told him, "Trust me, Abe, it's for the greater good. I'm going to a place where I'll be appreciated. Soon, they'll all remember the name, Prescott." Though that was all Abe could remember, he rewards the heroes with a Gold Pin for their efforts.

If Mickey damages or ignores 2/3 dioramas, Abe will make Beetleworx attack Mickey. At the end, he will become too corrupted after seeing the dioramas torn down and Gus takes him offline. As he loses connection his last words will be, "Now that wasn't nice at all!". Mickey will also receive Steamboat Willie Pants near the end of the Floatyard (Inside a shutter near the clown head area that opens only when you destroy the dioramas). Prescott will also be angry at Mickey and Oswald for meddling his plans, destroying countless Beetleworx, and even ruining Abe. 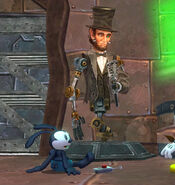 An early Abe model from a development build of Epic Mickey 2.

Early sketch of Abe
Community content is available under CC-BY-SA unless otherwise noted.