Aladdin is the leading protagonist from the 1992 film of the same name. He makes an appearance in Epic Mickey: Power of Illusion, where he has been sucked into the Cartoon Wasteland by Mizrabel and into her Castle of Illusion.

Aladdin can be rescued in Agrabah, near the beginning of the level at the top of the first set of stairs. Mickey will need to Paint him in to rescue him. Afterwards, he will assist Mickey by throwing fruit at his enemies, and at the end of the level he will return to the Fortress and set up his own room, handing out quests to Mickey.

Although his beloved, Jasmine, is in her own separate room, Aladdin will eventually pass by her. 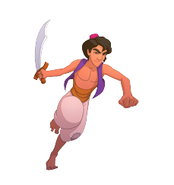 Aladdin Painted
Add a photo to this gallery
Retrieved from "https://epicmickey.fandom.com/wiki/Aladdin?oldid=32531"
Community content is available under CC-BY-SA unless otherwise noted.