"I hope you're GEARED up for this...Because this is going to be... BARRELS... of FUN!" - Animatronic Captain Hook, before he battles Mickey.

Animatronic Captain Hook is the third boss of Epic Mickey. He appears as an Animatronic made by the Mad Doctor, as a captain for the pirates. However, when the Mad Doctor stopped him and Pete Pan from being able to fight, Hook went berserk and turned on his crew, using a machine that turns pirates into mechanical Beetleworx robots, and vice-versa if Mickey chooses to paint the machine, to turn the crew into Bashers. The rejected design of Smee and a few others escaped to Ventureland.

He is voiced by Corey Burton.

During his fight, Mickey has three options:

In Epic Mickey 2: The Power of Two, Captain Hook disappeared and nobody explains to the player how; it may be related to the pirates being driven from Tortooga by Blackbeard. But there is a mission that involves finding Hook's clothes in some thinned chests and then giving the clothes to Animatronic Daisy or Smee to have the opening to the Construction Site in Ventureland.

If Mickey gives Daisy the captain's old clothes, it allows her to put the clothes on a dummy to convince Smee to find his old boss. Or, if Mickey gives the clothes to Smee, he'll give Mickey a fastpass, which will get Mickey into Tiki Sam's Basement Tunnel to the Jungle Cruise for free. If Mickey use the fastpass, Tiki Sam will say: "Mickey got a fastpass? I haven't seen one of those in ages." 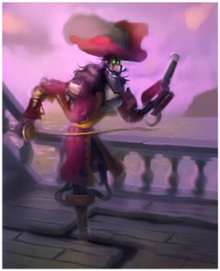 Concept Art of Captain Hook
Add a photo to this gallery

The stained glass windows in the Dark Beauty Castle that reveal the real Captain Hook, Scar and Maleficent.

The Hook stained glass window in the Dark Beauty Castle from Epic Mickey.
Add a photo to this gallery 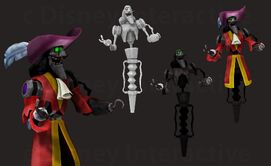 Retrieved from "https://epicmickey.fandom.com/wiki/Animatronic_Captain_Hook?oldid=37230"
Community content is available under CC-BY-SA unless otherwise noted.