Animatronic Goofy is a robot dog modeled after the real Goofy. He was one of the first characters to have been confirmed for Epic Mickey in concept art. In the game, Oswald had the Mad Doctor make an animatronic version of him as a friend for him before the events of the game (as with Donald and Daisy Duck). He appears in OsTown and has a mission, like Donald and Daisy, involving the recovery of his parts, which for him are in Tomorrow City.

There are several original characters in the game (one of them being called Tiki Sam) that has a similar appearance to Goofy. This may be a reference to Goofy's everyman cartoons from the 1940s and 1950s in which many Goofy-like characters appeared.

He is voiced by Bill Farmer.

Created by Oswald, who has always envied Mickey's life and friends, the Animatronic Goofy has been designed to clean different places in Wasteland. With a hoover, he managed to do his duty with a smile. Unfortunately, when Animatronic Goofy was doing his work at Tomorrow City, the Mad Doctor and his Beetleworx army dismantled him and so, his parts were strewn in the city. His head is contained in some kind of machine, in front of the fountain in OsTown.

Mickey Mouse and Gus the Gremlin, searching for access to Oswald's den, meet Goofy, who reveals his story to them and asks them to find his parts.

Finally, Mickey found/didn't find all the dog's parts and the robot could/couldn't return cheerfully to his duties. Then (only if he has given the parts), Mickey could go inside Ortensia's house and find her locket. After he leaves the house, Goofy reveals his anxiety concerning her absence.

In the Good Ending, Goofy is seen cleaning up Ostown, vacuuming in Ortensia's garden. In the Bad Ending, he is shown being sad, due to not having his body, as one of the window shutters outside Mickey's house falls off of its hinge in the distance.

Animatronic Goofy reappears in the sequel to the first game.

Mickey once again meets him in Ostown where he is sent flying by an explosion caused by three overcharged Thinner pumps. After he crashes to the floor and explains the situation, he realizes he didn't understand how Prescott told him to fix them, and so asks Mickey and Oswald to do it how Jamface told him. With that, he introduces the Fairy Sketch to the team. After finishing Episode 1 - A Family Reunion, he asks Mickey to go where the Thinner was pumped to so they can retrieve the parts of Oswald's statue; if Mickey finds the two heads for the statue, he has the choice to restore the Oswald statue or change it to Mickey's statue. Also, Oswald can make a statue of both him and Mickey (if they found both heads) by talking to Prescott's replacement in the Gag Factory and giving him some Scrap Metal. Mickey will get the achievement for doing this, along with Seth's garden quest with the decision of both Mickey and Oswald's heads made in the garden.

"Mickey Mouse has a couple of intrepid pals who don't seem to have anything better to do than share his adventures, so why not Oswald? That was certainly the Lucky Rabbit's thinking when he cobbled together spare animatronic parts and fashioned his very own versions of Donald Duck and the inimitable Goofy.

Sure, they look kind of creepy, but their mechanical hearts are in the right place (or at least pretty close; Goofy's heart might be closer to where his kidney should be, and you don't wanna know where his brain is.) And yeah, they know they're not the originals. But that doesn't make them any less devoted to Oswald, and always ready for whatever misadventure he has in mind!" (Animatronic Goofy's Tales of Wasteland profile)

Animatronic Goofy is a character in the Epic Mickey: Tales of Wasteland digicomics. These comics are a prequel to Epic Mickey and take place before the Thinner Disaster. He helps Oswald and Animatronic Donald in their struggle to clean the Clock Tower in "Clock Tower Cleaners" and joins Oswald in his dare with Pete (together with Donald) to stay a night in Lonesome Manor in "One Scary Night".

In this retelling of the story of the first game, Animatronic Goofy has been absorbed by the Shadow_Blot since the beginning of the story, and appears as one of the Lost Characters, along with Animatronic Daisy. This change may have been made in order to simplify the plot of the game.

Animatronic Goofy's parts were hidden in Tomorrow City. The locations are as follows:

Animatronic Goofy in Epic Mickey 2 captured from one of the previews for the game.

A sketch of Animatronic Goofy in the early stages. 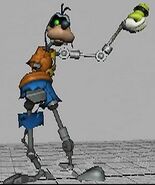 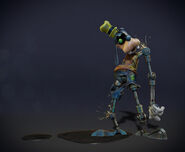 Animatronic Goofy in the Bad Ending. Looks so sad seeing him depressed...

A textureless Goofy.
Add a photo to this gallery

Retrieved from "https://epicmickey.fandom.com/wiki/Animatronic_Goofy?oldid=32858"
Community content is available under CC-BY-SA unless otherwise noted.