Tick-Tock is a crocodile in the 1953 animated film Peter Pan. In Epic Mickey, he appears as an animatronic crocodile, retaining his craving appetite for Captain Hook. Tick-Tock attacks Mickey when he is about to board the Jolly Roger, and when Mickey is fighting Captain Hook, Mickey has the chance to send him to the Crocodile by defeating him without saving the Sprite. It is known because Captain Hook tells Mickey "not to let me near that crocodile". If Hook is driven off the plank, the crocodile will attempt to eat him and drive him away while chasing after the pirate.

In the Bad Ending, it is revealed that Tick-Tock has devoured Captain Hook as only his hook is left floating in the sea before sinking beneath the waves. In the sequel, Tick-Tock does not make an appearance and is not mentioned except for Hook's treasure that you need for Damien Salt's side of the "A Captain's Life For Me" quest.

The model for Animatronic Tick-Tock.

Tick-Tock from the movie "Peter Pan" 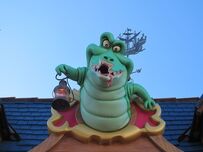 Tick-Tock from the "Festival of Fantasy Parade"
Add a photo to this gallery
Retrieved from "https://epicmickey.fandom.com/wiki/Animatronic_Tick-Tock_the_Crocodile?oldid=33726"
Community content is available under CC-BY-SA unless otherwise noted.