Babe is a character from the animated short Paul Bunyan. Babe is a big blue ox who was found in the snow by Paul Bunyan. Afterwards Babe became Paul's closest friend. He was later sent to Wasteland, and appears in Fort Wasteland as part of the scenery.

An image of Babe also appears on the Fortified achievement, one earned after successfully traversing the Fort. 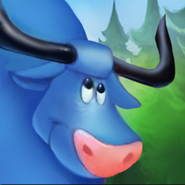 The Fortified achievement.
Add a photo to this gallery
Retrieved from "https://epicmickey.fandom.com/wiki/Babe_The_Blue_Ox?oldid=29717"
Community content is available under CC-BY-SA unless otherwise noted.