This article is about Big Bad Pete, the one residing in Mean Street. For the other Petes, see Pete (Disambiguation).

Big Bad Pete is a character in the Epic Mickey series. He is voiced by Jim Cummings.

When Mickey arrived at Mean Street, he immediately recognized his long-time nemesis hanging by City Hall. He is Mean Street's town jailer.

Pete explains that Wasteland has different versions of his character, and also gives Mickey a warning that as long as he doesn't mess with anybody, they won't mess with him. Pete was one of the people Mickey had to go to get the gears for the Projector Screen in the Penny Arcade.

Pete's quests have two formats, rounding up the Bunny Children to prevent them from causing trouble at Mean Street, or have Mickey run an errand related to any of his incarnations in Wasteland while Mickey is in Action Stages.

During the Good Ending, Pete is seen giving away fireworks to the citizens of Mean Street, while the Bad Ending has him scaring away the citizens and laughs. Both endings are meant to represent the ways in which we treat others.

Big Bad Pete makes his reappearance in the 2012 sequel.

He now plays a minor role appearing in the Mean Street City Hall and the Wasteland Museum. He also tells Laralee about the Real World objects that fall into Wasteland.

Later, he also goes to Prescott's Arena along with the Mad Doctor, a Hopper, and Animatronic Daisy to arrest Gremlin Prescott. He then returns to jail, where he keeps a 'watchful eye' over Prescott.

At the end of the credits, he appears with Small Pete and Pete Pan (and Petetronic in the Bad Ending only) grasping a fearful Prescott in his hand. He then tosses him into the Ventureland Projector Screen and follows with a menacing laugh, planning something as is evident by his final quote in the game. Just what his plans were remains a mystery to this day.

"So Oswald didn't get the universal acclaim and adoration that Mickey became heir to. What did he manage to acquire? Mickey's arch nemesis, the formidable and ubiquitous "Pete" who - in a variety of incarnations - has bedeviled everyone's favorite mouse since 1928.

And now he's in Wasteland, keeping up with his old tricks, wearing just as many different hats and identities as he ever did.

Whether he's thrusting his unwanted attentions on Ortensia or wreaking havoc while attired as an ersatz Peter Pan, you can count on this two-bit thug to be up to some new villainy." (Pete's Tales of Wasteland profile)

Interestingly, this definition seems to imply that in the comics' continuity, Pete Pan is in fact Big Bad Pete in disguise; but this is negated by the fact that both versions appear together in the post-credit scene of Epic Mickey 2: The Power Of Two.

Pete is a character in the Epic Mickey: Tales of Wasteland digicomics. These comics are a prequel to Epic Mickey and take place before the Thinner Disaster. He makes a small cameo in "Clock Tower Cleaners" as Oswald drives by and he and some of his different incarnations are mentioned in other stories. He plays his biggest role as the villain in "The Game's Afoot", where he tries to kidnap Ortensia for himself.

A scrapped version of Pete, who has seemingly captured Snow White. 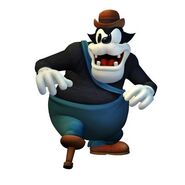 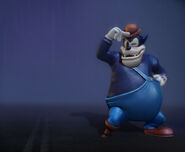 Pete holding Prescott in the ending cutscene of EM2 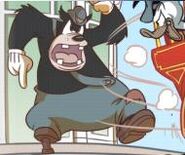 Big Bad Pete as he appears in Epic Mickey: Tales of Wasteland 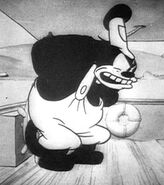 Pete as he appears in Mickey's debut cartoon, "Steamboat Willie" 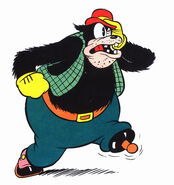 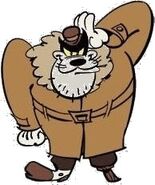 Peg Leg Pete as he reappears in the new Mickey Mouse series.