Captain Hook is a classic Disney Villian and was the main antagonist of Peter Pan and its sequel. He has most recently starred as the main villian yet again in Jake and the Never Land Pirates.

Captain Hook lives in the Toon World and has an Animatronic counterpart residing in Wasteland. Captain Hook is one of most popular Disney Villains and is also regarded as one of the funniest. He is constantly in battle with Peter Pan, his arch-nemesis, and his first-mate Smee is never too far behind him. His only real fear is a crocodile which took his hand.

Besides his obvious Animatronic appearance, Captain Hook is seen on a stained glass window in the first area of the Dark Beauty Castle.

Animatronic Captain Hook is mentioned by his friend Smee and other pirates, and he left his clothes in Ventureland. It is doubtworthy that, if he is still alive, he would be running around without clothes, so these may be a spare set.

In Epic Mickey: Power of Illusion

The real Captain Hook appears in Epic Mickey: Power of Illusion as the first boss. Under the enchantment of Mizrabel, Hook battles Mickey with a massive array of bombs on the deck of the Jolly Roger. After being defeated, Hook is restored to his proper self and wants revenge on Mizrabel for making a fool out of him. He returns to his room and hands out quests for Mickey to complete.

Captain Hook is the first boss fought in Epic Mickey: Power of Illusion. He will run towards Mickey and then use his cutlass to attack him. No substance will cause damage to him. Instead, Mickey must avoid the attacks by jumping and stomping on Hook, who will later lower bombs to attack Mickey. The player will be given two options: erase the hook or paint a net. The net will prevent a bomb from getting onto your character, so you must do this. This is usually either necessary or unnecessary to put a net to prevent an explosion from damaging your character from behind. Mickey can also erase the hook to let a bomb fall on Captain Hook. This will deal a great deal of damage on him. Captain Hook repeats the pattern again.

The Hook stained glass window in the Dark Beauty Castle from Epic Mickey. 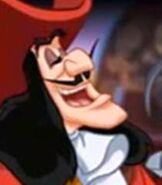 Captain Hook in Power of Illusion.