The Blot, Shadow Blot and others...

Clarabelle Cow is one of the inhabitants in the Cartoon Wasteland, residing in Ostown. She appears in black and white like many other residents, including her love interest, Horace Horsecollar. In the game, she is a gardener and good friends with Oswald and Ortensia.

She is voiced by April Winchell, who has voiced the character since 1996.

Disney shorts referenced by her

"You won't find a sweeter, gentler soul in the whole of Wasteland than Clarabelle. Once upon a time, she was a bright star in the Disney firmament. Yet now she is simply another neglected character who is remembered - if recalled at all - as one of Mickey's supporting players.

Yet unlike Oswald, who continues to stew over his forgotten glory days, Clarabelle had accepted her enforced retirement gracefully. She's perfectly happy, tending her garden in OsTown and engaging in the occasional flirtation with old pal Horace Horsecollar." '( Clarabelle 's "Tales of Wasteland" profile )

Clarabelle is a character in the Epic Mickey: Tales of Wasteland digicomics. These comics are a prequel to Epic Mickey and take place before the Thinner Disaster. She makes a cameo in the beginning of "Clock Tower Cleaners" but has a somewhat larger role in "The Rubbish Cup". She seems to be good friends with Horace and Ortensia.

When Mickey first arrives in OsTown, Mickey needs to find Oswald. He soon meets Clarabelle Cow, where she is tending to her garden. Mickey asks Clarabelle; where Oswald is.

She is very surprised about seeing Mickey. She references some of the cartoons she made appearances in as a star. Saddened at Mickey not recognizing her at first, Clarabelle informs Mickey that Oswald is at Mickeyjunk Mountain. She tells Mickey that to lower the bridge blocking the Projector Screen to Mickeyjunk Mountain, that he'll have to find Gremlin Prescott as he has been missing for a while. She also gives Mickey a task titled Noisy Safe to see about that safe. To unlock the safe, Mickey must simply talk to Pirate Moody (who is standing below the safe); and he will tell Mickey the combination, if Mickey paints in his house. If Mickey did paint in his house, he will give Mickey the combination and Mickey will be able to open the safe without dropping it on Moody freeing Gremlin Prescott and Clarabelle's task will be completed.

Clarabelle eventually requests Mickey to help her with baking a present for Horace Horsecollar. If Mickey is able to get her some ice cream, she'll make an Ice Cream Cake, and if not, she will give Mickey a pie to deliver to Horace instead, though she'd prefer to do something other then that for Horace's birthday.

For a quest in Ventureland, she can be asked to assist Mickey with a bouquet of flowers to give to Damien Salt for his efforts to ask out Henrietta.

Clarabelle is seen at the finale at the end of the game celebrating at Mean Street, cheering with all the other citizens there with the now-restored Cartoon Wasteland.

In Epic Mickey 2: Power of Two

Clarabelle reappears in Epic Mickey 2: The Power of Two. Mickey can do various quests and deeds for her, including restoring her garden, as it was thinned out by the damages of the quake. In the second game, she has pet Spatters, which Mickey can buy and retrieve flower clothing for each. She can also be Horace's Assistant should Mickey follow the right path.

At the end of the game, she can be seen either receiving a book from Horace (Good Ending) or throwing a piece of popcorn out to the parade, with Horace sighing beside her (Bad Ending). 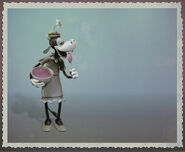 Beautiful Friendship Pin
Add a photo to this gallery

Clarabelle as she appears in recent media
Add a photo to this gallery
Retrieved from "https://epicmickey.fandom.com/wiki/Clarabelle_Cow?oldid=33616"
Community content is available under CC-BY-SA unless otherwise noted.