When Mickey arrives in the area that the Tower is held in, the smiling yellow face of the Clock Tower will thin out, replacing it with a purple, twisted, grinning one, and the Tower's arms burst out from either side of it. Somewhat basic for a boss, it attacks by slamming its hands and arms on the platform Mickey is on. Mickey can finish the battle in two ways:

The Clock Tower also appears in the Epic Mickey: Tales of Wasteland digicomics. These comics are a prequel to Epic Mickey and take place before the Thinner Disaster. He plays a major role in the "Clocktower Cleaners" comic.

The clock tower in its evil state

The clock tower in its friendly state

Mickey thinning one of the Clock Tower's arms.

Unwind the Clock Pin
Add a photo to this gallery

An early concept for the Clock Tower. 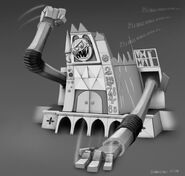 Early concept showing the Clock Tower smashing with his fists.

The diarama in Epic Mickey 2 that depicts Mickey's battle with the corrupted Clock Tower. There are also Hoppers in this photo.
Add a photo to this gallery

The Clock Tower in Epic Mickey: Tales of Wasteland.
Add a photo to this gallery
Retrieved from "https://epicmickey.fandom.com/wiki/Clock_Tower?oldid=37817"
Community content is available under CC-BY-SA unless otherwise noted.