Damien Salt is a one of the pirates that escaped from the Pirate Conversion Machine in Ventureland. He is in love with Henrietta the Cow.

Damien will ask you to get her something she likes. She will tell you she likes flowers. Then go to Clarabelle and she will send you to get three flowers (locations can be found in Gather the Flowers .) If give him the flowers, Henrietta will kiss him and Salt will give you the figurehead for free and you will be able to open the chest he was guarding.

You can also buy an ice cream at the Ice Cream Parlor, but if you give that to Damien Salt, he'll try to give it to Henrietta, but she will refuse it. If you do this, he'll sell the figurehead to you but it will have a costing, whose is 50 E-Tickets. After this, he will hate both you (for not helping him) and Henrietta (claiming it's weird that a cow is lactose intolerant) and shout, "Good riddance to her, and also to you!". Finally, after you defeat or either redeem/deal with Captain Hook on the Jolly Roger, Damien, Smee and the other pirates leave Ventureland returning to their original location. This is only if you restored the Robotic Beetleworx pirates or ceased the population of them.

Damien appears in the sequel, asking Mickey to get the Giant Pearl so Henrietta's father will accept him in the quest A Captain's Life for Me.

Damien Salt appears to be based on one of the members of the original Captain Hook's crew. Strangely enough, Damien Salt is even quite like his real counterpart, making people wondering about why he is a forgotten character. 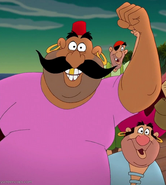 Damien Salt as he appears in the Peter Pan franchise.
Community content is available under CC-BY-SA unless otherwise noted.
Advertisement