Dark Beauty Castle is a torn-down structure that overlooks most of the world in the Cartoon Wasteland and was once the royal palace of Oswald the Lucky Rabbit and his family. It is based on the entrance to Fantasyland from the Disney parks and has several autonomous machines patrolling about, including the Mechanical Arm. It also serves as the location for the first and last levels of the game. If you look from where the projector screens are in Mean Street, you can see the castle in the distance.

Dark Beauty Castle has a tragedy filled history in the Wasteland. It was from here that Oswald the Lucky Rabbit ruled the Wasteland as a benevolent king. His colored glass window mosaic can be seen as the main visual point in the level. Its current state was due to the coming of the Blot. The castle now stands as a torn-down melancholic site that can serve as an allegory for the rest of the Wasteland and what happened to Oswald's kingdom.

The castle has specific areas that only appear in the game for exploration and the defeat of enemies, such as the throne room.

Like many castles, mansions and palaces of the real world, however, there are most likely many more rooms in Dark Beauty Castle as well, such as the King and Queen's bedchamber, the servants' bedchambers, dining rooms, kitchens, bathrooms, the living room, guest bedchambers, a nursery for the Bunny Children, a gymnasium/fitness center, an armory for the guards' weapons, catacombs, dungeons, indoor swimming pools and spas, recreation rooms that include an arcade, laundry rooms, project studios, a home theater, a ballroom, elevators and more.

The Mad Doctor's Dark Beauty Castle laboratory is in a room with an exposed roof, featuring various stained glass windows depicting Maleficent, Scar and Captain Hook, with a massive King Oswald window at the back of the room by the controls for a mechanical arm the Mad Doctor uses in his deadly surgeries. There are two levels—a lower level and a balcony. On the lower level below the balcony is a series of statues taken from Beast's castle, including one of the Beast himself. On the balcony is an entrance to a Utilidor that leads to the castle gates.

Mickey visits this room twice, as it provides the first room he visits in Wasteland and later ends up crashing there with Oswald and Gremlin Gus in the Moonliner Rocket towards the end of the game.

At the gates of the castle are two staircases that go up to the gear controls of the castle door. The gap is blocked, but there is a projector screen located there that leads to the Utilidors of Gremlin Village. There is also a massive catapult in the courtyard where Gremlin Calvin lies trapped.

Oswald's throne room is a gallery of paintings depicting Wasteland before and after the Thinner Disaster, with the most prominent of them being a large stained glass window depicting Oswald, Ortensia and some of their Bunny Children. When all the paintings are filled in, light emitting gargoyles in the forms of Victor, Hugo and Laverne can be used to activate other gargoyles on the upper levels and open up an entrance to a hidden projector screen to the fireworks control tower. Another screen can be activated if switches in the walls are activated to bring the chandelier down, though this will be at the cost of being unable to restore the paintings.

From the fireworks control tower, Oswald would put on elaborate fireworks shows for his fellow Wastelanders. It is also where Oswald placed the stony remains of Ortensia, after she was petrified by The Shadow Blot during the Blot Wars. Hallways and projector screens connect it to the three castle towers the fireworks are mounted on.

The lowest of the three fireworks towers, Sorrow Tower is connected to the fireworks control tower by a Utilidor. A climb up crumbling staircases leads to a fireworks activation crystal surrounded by four gargoyles (from the Beast's Castle). The tower has two pointed roofs—a blue one and a crumbling red one over the projector screen to Grief Tower.

The journey up Grief Tower goes along one continuous and gradually crumbling ramp where the Shadow Blot tries to slow Mickey down by breaking the walls. When Mickey encounters the Shadow Blot at the activation crystal, he sends in various Blotlings to attack Mickey. The roofs are similar to that of Sorrow Tower's.

Loss Tower is the last of the three fireworks towers. Instead of climbing on the inside, Mickey climbs mostly on the outside, battling Blotlings inside three arenas before arriving at the activation crystal at the top. The Shadow Blot allows Mickey to fill in the gargoyles before attacking him and bringing the tower down, leaving Mickey to take a Utilidor back to the fireworks control tower after plummeting to the lower levels.

Loss Tower is distinctive from the other towers for numerous dragon Maleficent motifs, including various banners inside and a ring of statues upon the roof. There are also two statues of the Grim Reaper on the bridge leading to the tower.

Dark Beauty Castle is where the game starts and finishes. The first place Mickey encounters is the Mad Doctor's lab where he uses the mechanical arm to try to extract Mickey's Heart, but fails in the attempt. When Mickey tries to fight the Mad Doctor, the Blot tries to attack Mickey but fails when the brave mouse picks up the brush and scares him away. When the Mad Doctor realizes the Blot's disappearance, he uses a lever on his machine to escape. Mickey suddenly discovers Oswald behind a machine, nervous of this, Oswald tries to escape the way the Mad Doctor did. Instead he ruins the mechanical arm and makes him berserk. When Oswald escapes through a door while avoiding the arm's attacks, it sees Mickey and decides to destroy him. Gremlin Gus appears and distracts the arm shortly by teleporting to various spots. While in the lab, Gus teaches Mickey to jump and to use his spin move to destroy the machines that power the Mechanical Arm. While traveling through the castle, they encounter two Seers and Gus teaches Mickey to fight with his brush. Finally they escape to Gremlin Village to try to find a way for Mickey to escape Wasteland.

Near the end of the game, Dark Beauty Castle is the second-last place to play in (with the last one being Inside the Blot). Originally the heroes' plan was to use the Moonliner Rocket to fly to the Blot and when near Mickey's heart, activate the self-destruct function. Unfortunately the plan fails because of the Blot's bloticles absorbing the paint from the rocket, making them crash in the Mad Doctor's lab. When Mickey wakes up (from landing faint), the whole place is covered by Thinner. As Mickey drains the Thinner out of the lab, the door to the throne room is briefly opened as a Slobber guarding the key closes it. Mickey must then either befriend the Slobber for him to give the key by his will, or erase it and get the key while it's melting. When entering the throne room, you have two choices to advance to the fireworks control center: painting in all the murals in the room (four happy, four sad) and then activating the gargoyles or swinging the chandelier by thinning out the chain holders hidden in the room and leaving the room in ruins. Oswald will explain Mickey and Gus that they have to activate the three batteries that will prepare the fireworks to launch at the Blot. There, Mickey will climb 3 towers: Sorrow, Grief, and Loss. When finishing and trying to activate the remote control the Blot grabs Oswald, Gus, and Ortensia (converted into an inert statue), forcing Mickey to jump into the Blot.

After Oswald inserts Mickey's heart, he uses his remote to launch the fireworks that obliterated the Blot. Afterwards, rain of paint fell on Wasteland that restored the castle to its former splendor and glory.

Mickey reenters Wasteland again by falling into a window of Dark Beauty Castle, where Ortensia and Gus are. Ortensia and Gus don't trust the Mad Doctor, but Oswald is convinced that they should give him a second chance. Mickey suggests they go find the Mad Doctor, when a quake starts falling, and the castle starts collapsing all around them. When some rubble comes down and separates Ortensia from the others. Mickey ,Gus and Oswald outrun the rubble to escape the castle and reunite with Ortensia. Eventually all four escape by train.

The "My Other House is a Castle" pin found in Ortensia's house and the above description seems to suggest that Oswald and Ortensia used the castle as a second home.

Due to the earthquakes, the castle has re-grown inert parts and is in a collapsing state.

Neutral: It sounds mysterious and dark as it should be. A haunting, music box-esque rendition of Once Upon a Dream can be heard at various points in the music.

Paint: Continued use of Paint creates a lighter, eerier atmosphere. It takes the music box feel touched upon in the Neutral form and runs with it, being much quieter and gentler than other versions. Soft bell and flute-esque sounds recur through the song, climaxing in a louder ending portion announced by gong, composed of violin and woodwind sounds.

Thinner: Continued use of Thinner creates an extremely dark atmosphere, fitting for the villain Maleficent. Sousaphones carry the main tune of this version, complimented by big death bells and shrill metallic strings. 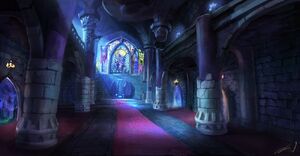 Retrieved from "https://epicmickey.fandom.com/wiki/Dark_Beauty_Castle?oldid=31971"
Community content is available under CC-BY-SA unless otherwise noted.