View source
Note: The Digicomics app is no longer available on the App Store, so this page may not be expanded upon in the future. 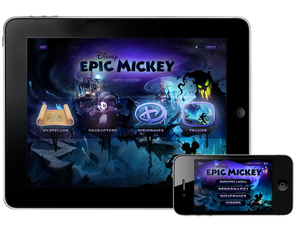 The map is simply the map used for the pre-Thinner Disaster version of Wasteland seen in the Japanese website.

This teaser trailer is the official E3 trailer, which showed the making of the Ears logo, and it's narrated by Yen Sid.

App menus for the iPad and iPhone

Description of the "Pirates of the Wasteland"