Dopey is a character from the movie Snow White and the Seven Dwarfs. He makes a few appearances in the Epic Mickey saga, mostly with the other dwarfs.

Dopey appears in an early idea while he was trapped by the Storm Blot along with Genie, Liver Lips McGrowl, and other toons before was scrapped.

Dopey, along with all of the dwarfs, appear as headed statues in the Rainbow Falls substations, where Mickey and Oswald have to fix the Projector Screens.

In Epic Mickey: Power of Illusion

Dopey makes his first true appearance in this game. He is sucked into Wasteland by Mizrabel's powers. Snow White will eventually request that Mickey locate him and the other dwarfs. 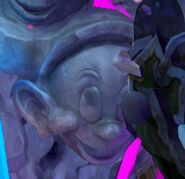 The statue head of Dopey in Rainbow Caverns.
Add a photo to this gallery
Retrieved from "https://epicmickey.fandom.com/wiki/Dopey?oldid=26806"
Community content is available under CC-BY-SA unless otherwise noted.