This article or section about scrapped content has a low amount sources or citations, so the legitimacy of certain information cannot be confirmed. If you are the original contributor of this information or you have a source to provide, please add it to this article and remove this template.

Wonderland was dropped from the game fairly early on. According to The Art of Epic Mickey, the concept was never attempted due to time constraints.[2] Concept art for an area known as the Tulgey Woods exists, and Wonderland itself can be seen in the opening and ending cutscenes.

The Beanstalk Factory may have been another level that was dropped at some point in production. Much like Wonderland, the level itself can be seen in the opening cinematic, in addition to several official maps of Wasteland. Interestingly, there appears to be a town at the base of the Beanstalk.

A Fantasyland based level was going to be in Epic Mickey before being scrapped. It is possible it would have been linked to Wonderland. [citation needed]

Disney Gulch was going to appear in the first game before being moved to the sequel Epic Mickey 2: The Power of Two. [citation needed]

The Jug Pump, aside from being a major story element, would have been featured as an aquatic level filled with pieces from Disney's nautical features, such as the Nautilus from 20,000 Leagues Under The Sea, alongside the mermen from The Little Mermaid. It would have been ruled by a rejected design of Ursula. [citation needed]

A level based on the Country Bear Jamboree attraction inhabited by its characters which was scrapped from Epic Mickey. [citation needed]

According to Chase Jones, Ventureland was originally linked to a Neverland-based level, described as an island surrounded by a lake.[3] The level got as far as having a very early blockout, but it was scrapped because of scope and there being “too much more to do”. [4]

Small Pete was originally going to be a mini-boss in the World of Gremlins level where you had to either free the Gremlins to take him out which is the Paint path or fire the conveniently placed cannons onto him which is the thinner path. [citation needed]

A boss battle on Mickeyjunk Mountain would have taken place between Mickey and Oswald, the latter piloting a large robotic suit based on the Yeti from the original attraction. It was cut midway through development due to "reasons of scope". [citation needed]

Concept art exists of a fusion of the Blot and Oswald. It is unknown how it would have been fought, as it was a concept removed early in development due to the developers not wanting to tarnish Oswald's image as a likable character.

Much of the early Blot concept art depicts him with wings and a much more dragon-like form.

According to lead designer Chase Jones, an early story idea involved ink that would corrupt Oswald along with Wasteland and Mickey would have to restore them by removing the ink’s corruption. [6]

In 2020, Jim Dooley began uploading music from the game onto his YouTube channel, including some tracks that didn’t make it into the final game. These include “Black Pete Outro”, intended for an unused cutscene, three tracks for a “Laboratory” area, possibly the Mad Doctor’s Lab, and early versions of the tracks for Dark Beauty Castle. 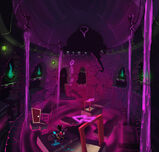 Concept art by Shawn Melchor of Blotling incubators inside the Blot, but didn't make it into the final game[9]

Concept art depicting wasteland as a “World of trash”. The top image is of several trees, while the bottom one is of a bridge. 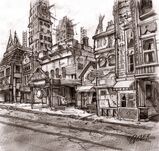 Concept sketch of Mean Street. Note the giant fork on one of the buildings.

A piece of concept art of a cave-like design for Wasteland.

Early concept art of Mean Street. Note that Pinocchio has a pencil for a leg.

Early on in development, the team considered giving Mickey more adolescent proportions, but was dropped due to negative screening results.

Prior to having the brush, Mickey had ink powers, which would be used via his hands.

Mickey using his ink powers to paint in a doorway. 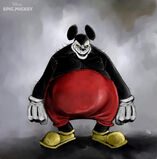 Mickey fighting a monster at the edge of a cliff.

Mickey encountering a monster, possibly an early version of the Blot, rising out of the ocean

Early designs for the Spatters

Early designs for the Dropwings

Concept art of a “Vampire Bunny”

The original amount of film reels and pins that were added. 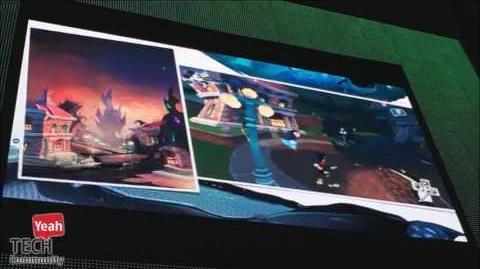