Epic Mickey: Power of Illusion (Mickey's Marvelous Adventure in Japan or known to fans as Epic Mickey 3: Power of Illusion) is an Epic Mickey game for the Nintendo 3DS, developed by by Dreamrift Studios rather than Junction Point. The game is a follow-up to Epic Mickey and also a follow-up to Castle of Illusion Starring Mickey Mouse, a 1990 Mickey Mouse game for the Sega Genesis. The hand-drawn sprites in Power of Illusion are extremely compelling, and, thanks to scrolling parallax backgrounds (a heavily-used graphic technique in the days of 16-bit gaming), reportedly look great in stereoscopic 3D. Every level in the game is based on an animated Disney adventure, from Sleeping Beauty to Tangled and others in-between. Every character rescued by Mickey will take up residence in the fortress that Mickey uses as his home base, a confirmed nod to the esteemed Suikoden RPG series. Sometimes the player will find references in the unlikeliest of places.

Paying tribute to the classic Sega Genesis title "Castle of Illusion Starring Mickey Mouse," "Disney Epic Mickey: Power of Illusion" focuses on the fabled Castle of Illusion, which has fallen into Wasteland, an alternate world filled with 80 years of forgotten Disney characters and theme park attractions – and now forgotten video games. The evil witch Mizrabel, villainess from the classic "Castle of Illusion Starring Mickey Mouse," finds herself an unwilling inhabitant of Wasteland, and unleashes a plot to escape using the Castle of Illusion to imprison and drain the cartoon essence from currently famous Toons. Players take on the role of Mickey Mouse as he is pulled back into Wasteland and utilizes his magical brush to wield paint and thinner to confront Mizrabel and save Minnie and the Toons.

The game makes heavy use of the Nintendo 3DS's stylus. By tapping the item icons that exist in every level, you can "paint" (trace) those items into existence, including cliffs, cannons, and floating platforms. The more precisely you trace, the better and easier to use it is for Mickey. A flawlessly-painted cannon will only damage Mickey's enemies, for instance, but if the player messes up the painting, the cannon will be a danger to everyone in the area, including Mickey. Sometimes the player needs to erase objects, which is done by spreading thinner over the object. Again, the stylus comes into play here but the whole item must be erased, not just traced.

Quests also make a return in this game, and are vital to completing some parts of the game. Certain characters or items will only show up in a level once the respective quest has been activated. Quests will become available as the game continues, and as other quests are completed.

A demo version was released for the Nintendo 3DS in late 2012 that allows for Mickey to reach a certain point in the game. Finishing the rest of the game requires the full version. 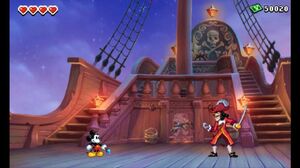 Retrieved from "https://epicmickey.fandom.com/wiki/Epic_Mickey:_Power_of_Illusion?oldid=35466"
Community content is available under CC-BY-SA unless otherwise noted.