Disney Epic Mickey: The Graphic Novel is a graphic novel that was included in the Epic Mickey: Tales of Wasteland digicomics. It's a 64 page-long graphic retelling of Epic Mickey. However, it's not exact. Some events of the game are arranged in a different order and are either expanded upon or cut down.

The graphic novel was purchasable in the Digicomics app for iOS devices, and was supposed to be followed by a physical printed release in both hardcover and standard editions before it was cancelled.1 The app has since been removed from the App Store. Later, it was released on the Amazon website Comixology.

A graphic novel based on Epic Mickey 2: The Power of Two has also been made, but has not been released in English.

Like in the game, Mickey travels through the Magic Mirror and enters Yen Sid's workshop. He waits for the wizard to leave, then plays with the brush and tries to create a small model of himself. It quickly turns into the Blot. Mickey then proceeds to use the Thinner Jug to melt the Blot, Mickey hastily leaving and the Blot and Jug falling into Wasteland.

Mickey then becomes famous and is resting in bed when he feels dripping. He thinks it's a pipe leaking, then finds out its the Shadow Blot coming through the mirror. The Blot grabs Mickey and drags him into Wasteland, the latter grabbing the brush and telling himself to wake up.

As the Blot and Mickey temporarily merge and tumble into Wasteland, someone sees them and instantly realizes that the Blot grabbed Mickey. He goes to Dark Beauty Castle, where they land.

Mirroring the game, the Mad Doctor tries to steal Mickey's heart with the Mechanical Arm. Mickey breaks free and hurls the plunger at Doc, claiming that his nephew Morty could've busted out of that. The Blot appears, Mickey grabs the brush in an En Garde fashion and scares the Blot away. The Mad Doctor also makes his escape. He goes through the escape hatch, leaving Mickey to deal with the Mechanical Arm. Mickey dodges an attack from its chainsaw, which goes straight through a metal container of some sort. Gremlin Gus is freed.

At first Gus thinks that Oswald freed him, but quickly realizes that his rescuer isn't Oswald that rescued him, but a mouse who looks a lot like him. Mickey introduces himself and asks who Oswald is. Gus quickly replies, "no one." Oswald overhears this and leaves Mickey to find his own way out in disgust. Gus instructs the mouse to do a Spin Attack on the Mechanical Arm's control panel, shorting it out.

Gus sees that ink is dripping off of Mickey's body. The mouse says that the Blot dragging him down here must have been what did it. Hearing this, Gus realizes with a shock that he's the Mickey Mouse. He's about to say something else, but stops himself. He takes Mickey to see Oswald, remarking that the Blot isn't going to make it easy. Mickey says that the Blot didn't like the brush, and Gus exclaims that it's magical, saying that "If it's magical, a Gremlin knows it."

The two quickly encounter a pair of Seers, and Gus teaches Mickey how to use the brush to erase and befriend enemies. After doing so, Mickey says that that wasn't so hard, and Gus says that Seers are just the beginning, and that there are a whole lot of other Blotling types in Wasteland.

Mickey asks where they're going, and Gus says they're following the rabbit. Mickey says that it sounds more like Wonderland than Wasteland. Still, Mickey came through a mirror, so it kinda makes sense. Gus instructs Mickey to go through the Projector Screen. Mickey asks what's on the other side, and Gus replies that he'll recognize it when he sees it. The two jump through. Mickey instantly recognizes the scenery as Steamboat Willie. Dodging Peg Leg Pete , Mickey and Gus jump through to the other side.

As soon as they step through, they're almost crushed by the Clock Tower. The demented timepiece has gone insane from the Small World song, and decides to smash anything small. Mickey replies that while he's small, he's gutsy. After a long battle (each minute ticked off by the clock), the Clock Tower's Thinner-covered face falls off and crashes on the pavement below. Mickey then creates an anvil with the brush and smashes the phonograph playing the song. As he and Gus are exiting via the staircase where the Clock Tower's face was, Mickey complains that the song is stuck in his head. Gus says that it's enough to drive anyone mad. Mickey laments that maybe he should've given the Clock Tower a chance to be redeemed instead of just destroying him. The two leave with barely another word.

They soon come across some old posters advertising Oswald. Gus explains Oswald's history to Mickey almost word-for-word from the game. At the mention of the Thinner Disaster, Mickey remembers his escapade in Yen Sid's workshop with the Blot. He now realizes that it was he who, in his playfulness, had brought disasters upon others. He and Gus jump through the next portal, which leads to Mean Street.

Gus explains that Wasteland is a home for forgotten characters like Oswald and himself. Gus leads him around Mean Street, eventually meeting Horace Horsecollar. As in the game, Mickey doesn't remember him. Horace merely laughs it off, saying that once you end up in Wasteland, everyone forgets you. Horace asks Gus to take him to see Clarabelle. Mickey doesn't remember her either. The cow asks the mouse if he's forgotten Minnie, too. Mickey exclaims that they're dating. Clarabelle is stunned that they're still dating and tells Mickey that "a girl's only going to wait so many decades for a proposal."

The conversation is interrupted by a Spatter attack. Mickey quickly uses Thinner to wipe out the enemy. Clarabelle worries why it was here, as Mean Street was one of the last refuges. Gus reassures her that they'll find out and encourages Mickey to go through the next Projector Screen. Gus says that the Blot's forces do tend to avoid Mean Street. Mickey asks why one showed up now, and Gus says that it was because of him. Mickey asks if that makes him some kind of "Blot magnet", and Gus says that they shouldn't wait to find out. The two jump through the Screen.

Mickey doesn't recognize the cartoon inside. Gus explains that it's "Oh What a Knight," one of Oswald's. The two arrive at the base of Mickeyjunk Mountain. Gus says that Mickey has everything Oswald wants, including a heart. Mickey remembers that the Mad Doctor was after his heart. Gus explains that forgotten characters lose their heart, and without it, no one can leave. Mickey asks if that means that Oswald and the Mad Doctor are working together. Gus says that they hate each other and doubts that the Doctor wanted Mickey's heart for himself. Mickey starts to ask who he tried to get the heart for, when they're interrupted by someone. He says that Doc wants Mickey's heart for the Shadow Blot. Once he leaves Wasteland, it will belong to the Doc. The voice belongs to Oswald, of course, who is further up the Mountain. Mickey starts climbing up to him, saying that the entire mountain is made out of toys and souvenirs about him. Oswald throws down one of his detachable feet and hits Mickey in the head. Oswald rants on about how the mountain is all about him. Oswald tells Mickey about the Moonliner Rocket and how it can get him home. The rest of the game is shortened, and the bosses are reduced to one panel. Mickey returns to the Mickeyjunk Mountain, where Oswald is waiting. The Blot escapes exactly like the game, and resembles the false Shadow Blot. The graphic novel refers to him as the Phantom Blot. The rest of the novel follows like the game, but with some added dialogue.

Differences from the game

Notice: This article contains spoilers. Read at your own risk.

Ortensia sacrifices herself to save Oswald by pushing Oswald away from the Blot's attack and gets hit herself.

Oswald is reduced to tears when he finds Ortensia 's statue-like remains. " His entire reason for living had been obliterated by the Blot." EM Graphic novel. 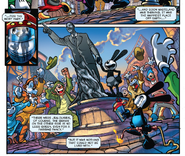 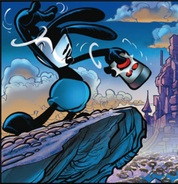 Retrieved from "https://epicmickey.fandom.com/wiki/Epic_Mickey:_The_Graphic_Novel?oldid=37086"
Community content is available under CC-BY-SA unless otherwise noted.