Wonderland was originally planned to be in the game. However, due to time constraints, it was axed. Several elements of the area still exist within the game however, most notably in the Floatyard.

Tomorrow City was going to appear in the game. But due to time constraints the level and the plot coinciding with it was scrapped. However it was still mentioned in the Autotopia level.

In the original ideas for the game Mickey, Oswald, and Gremlin Gus would have gone to the center of Dark Beauty Castle to confront the Mad Doctor after learning that it was he who made the Blotworx all along. According to concept art Mickey would be captured and strapped down and would have the Shadow Blot's ink extracted from him by a special machine.

A lot of story elements were cut in the making of Epic Mickey 2.

There was going to be a sub plot in Ventureland about a pirate war between Animatronic Captain Hook and Blackbeard (based on his old incarnation in the Pirates of the Caribbean ride most likely before being replaced by Captain Barbossa). Pirate Pete was to be working for one of them.

The main plot was also different. Big Bad Pete would have worked as a spy for the Mad Doctor but later betray him after Gremlin Prescott died at the hands of the Blotworx. Heading to the Mad Doctor's lair in the center of Dark Beauty Castle, Mickey would be captured and have the Blot's ink that was still within him extracted, using Mickey's heart as a power source to revive the Blot. The Mad Doctor would then merge with the Shadow Blot and control it from within. Left with no other choice Mickey destroys his own heart to take the Blot with it. After doing so Yen Sid would have been touched by Mickey's sacrifice and give him a new heart. Oswald would also gain a heart as well but would decide to stay in Wasteland with Ortensia. According to Chase Jones, this early storyline was from a point in development where the game was standalone “and not really thinking about having a third game, DLC, etc.” and that the story had to be opened up to present more ideas and possibilities for the future. [1]

Concept was made of Mickey, Oswald and Ortensia in a world based off Robin Hood. Minnie is also depicted as being present here. The heroes would face against Prince John and the Sheriff of Nottingham. Another idea involved the jungle from The Jungle Book animated movie by Disney, which appears to be merged with Ventureland. It's worth noting that whilst this did not make the final cut, a model of Baloo is still present in the game, much like how remnants of Wonderland are also present. Models of an Archer and Rhino Guard from Robin Hood, and Philoctetes from Hercules have also been found, suggesting it was considered at one point.

Scrapped dialogue in the PC files of the game suggests that there was once a mechanic to allow the player to leave Wasteland and enter the cartoon world through a TV either located in the Mad Doctor's Attic or the Walt statue.

Spatters with robot spider legs would have been enemies at one point. Please see the gallery at the bottom for more details.

Several pieces of concept art show a much more different approach to the Blotworx designs. These designs were much more equal in the distribution of Blot and machine, also heavily resembling the false Blot.

One of these Blotworx designs could possibly be the fusion of the Blot and the Mad Dctor that would have been in encountered in the game's original ending. It also appears to have something red inside it which may be Mickey Mouse's Heart providing some evidence to support this theory.

A Beetleworx that would have been a walker type mech and could actually controlled by Mickey would have been in the game. It seems to work like Tanker shooting either Paint or Thinner and appears to be a sort of mini variant of the Tanker as well. [2] The one concept found showed it was to be a combination of Sebastian from The Little Mermaid and one of Pooh's Hunny Pots.

The Rocker Blotworx was originally modelled after Herbie the Lovebug.

A scrapped voice snippet spoken by Gremlin Prescott reveals his position on the World of Evil TV show, as the narrator. 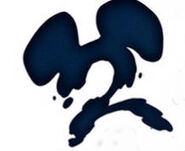 An unused logo/icon for the game.

Concept art of Mickey fighting a Spatter in what appears to be Tomorrow City.

Mickey and Oswald against a horde of Spatters with robotic legs while Mad Doctor is "imprisoned" and Big Bad Pete is watching in the shadows.

Mickey about to have the Blot extracted out of him. This may have been intended for the opening sequence of the game, where Yen Sid tells of Mickey's past adventures.

Concept art of Mickey, Oswald, Minnie and Ortensia in the Jungle Book world.

Ventureland and the Jungle Book world in collision.

Concept art of Mickey, Oswald, Minnie and Ortensia in the Robin Hood world

Other concept art of Mickey, Oswald, Minnie and Ortensia in the Robin Hood world.

A WIP model of one of the archers from Robin Hood.

WIP models of one of the Rhino Guards from Robin Hood.

Completed model of one of the Rhino Guards from Robin Hood.

WIP model of Philoctetes from Hercules.

Concept art of what may be an early version of Disney Gulch. Similar props appear in the Disney Gulch segment of the World of Evil. 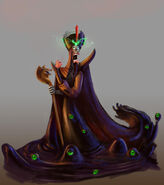 Concept of a Blotworx Jafar.

Concept of Animatronic Timon and Pumbaa.

The former Rocker design based on Herbie the Lovebug. 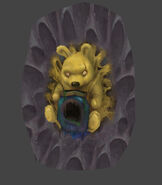 A scrapped object presumably from Disney Gulch that appears to be modelled after Winnie-the-Pooh. 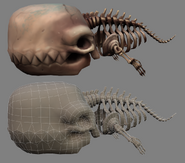 A skeleton model that strongly resembles Monster. The presence of another similar-looking skeleton in the D.E.C. suggests it was to found there.

An earlier incarnation of Mean Street. The fact it was modelled suggests it was heavily considered at one point.

An alternate view of the Mean Street model.

Another view of the Mean Street model.

A close-up of the Mean Street model.

An Eeyore model that was fully modelled and textured, yet was absent from the final game. Its worn appearance suggests it could have appeared in either the D.E.C. or Disney Gulch.

Concept art of an early version of the Devil caverns

Concept art of an unused scene

Concept art of the boss battle against the Mad Doctor, which originally took place in Mean Street
Add a photo to this gallery