The Floatyard is a location in Wasteland first introduced in Epic Mickey 2: The Power of Two. This location was first unveiled in Volume 282 of Nintendo Power.

The land is a junkyard made up of forgotten parade floats with a location that borrows elements From Disney's 1951 film, Alice in Wonderland. It also features a giant float version of Stromboli from Pinocchio.

Mickey, Oswald, and Gremlin Gus first encounter Gremlin Prescott working on something. After bothering the trio, he makes them chase him through the Floatyard. And so the heroes have to go through many of Prescott's contraptions and new types of Beetleworx When catching up to the tricky gremlin, you will have to fight his greatest creation: a Mech in the shape of Prescott's face in Prescott's Arena, though whether you are able to take the Thinner path or Paint path depends largely on how you get through the Floatyard. Although it is not required, you can return here to find Gremlin Kip. He'll give a quest to you to locate and take photos of floats around the Floatyard.

There are two ways forward in this level; one is to take advantage of the fireworks and blow up another entrance to a projector. The other is to cover yourself in Invisible Ink and sneak past the eye guarding the projector leading to Prescott's Arena.

Concept art of an area in the Floatyard. 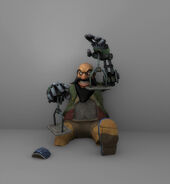 Model of the Stromboli float.