After the sabotaging of the Wasteland projectors begins to point towards him, Prescott disappears. Ghost Ian of Blot Alley, Petetronic of Club 13, and Abe of the Wasteland Dioramas all tell you they saw him. After you follow their clues, Prescott is later seen in the Floatyard where he is seen taunting Mickey and Oswald to follow him, saying they'll never get past his defenses. When they catch up to him in Prescott's Arena, Prescott lets on about how his "talents" were wasted at the Gag Factory, feeling rejected by Gus. Soon, they find themselves in battle with a mechanical cannon of Steamboat Mickey (through the good entrance only) before going toe to toe with a giant robot with Prescott's face on it (Prescott's Mech). Once Prescott's Mech has been defeated, Gus apologizes to him, saying he didn't want this to happen. Prescott then mutters in disbelief, mentioning that someone told him that no one could defeat him. Gus asks him who he's talking about. But just as Prescott was just about to tell them, the Mad Doctor arrives with Daisy Duck the reporter, her cameraman, Big Bad Pete, and a Beetleworx Hopper. Although Prescott points towards the Mad Doctor, no one seems to notice him as Daisy tells the camera that they are on the trail of the notorious Gremlin Prescott and now plan to find out what he is up to. As everyone is still distracted, the Mad Doctor's Beetleworx Hopper hypnotizes Prescott. When they questioned in the song "The Fall of Prescott" by the Mad Doctor, Prescott tells everyone that he planned the earthquakes and sabotaged the projectors on his own before being carted off by Big Bad Pete back to Mean Street and into Jail. The doctor then declares that he was working alone and that his evil has now met its fate. 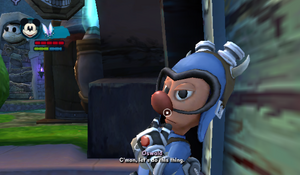