Gremlin Sparks is a Burgundy Gremlin that can be found and rescued in Epic Mickey and Epic Mickey 2: The Power of Two, in two different locations.

He is trapped in Tomorrow Square in Tomorrow City. There is a path to the back that slopes up. Normally, Mickey would take this path to jump on the trams, but if he keeps going, he will reach the hidden room containing the gear that starts the Rocket Ride and Sparks' cage. After he is free, he asks Mickey to free his friend Nova, because he can help Mickey with the trams. Sparks then says he could never handle that stuff himself because it's too dangerous.

Gremlin Sparks has more of a role in Epic Mickey 2, although he has a different outfit and face coloring. He is found in Mean Street up the slope after Mickey exits the underground, and he appears in Bog Easy, first in a cage, and later he repairs Donald's boat, and the building that Metairie and Bertrand want. He breaks the robot frogs near to the train, if Mickey freed him of course. 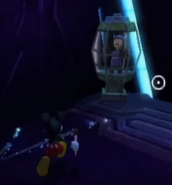 Add a photo to this gallery
Retrieved from "https://epicmickey.fandom.com/wiki/Gremlin_Sparks?oldid=35563"
Community content is available under CC-BY-SA unless otherwise noted.