Gremlin Village (known as World of Gremlins as a whole) is a level of the Wasteland that is made up of the remains of the It's a Small World attraction and various elements of Fantasyland. There are a few theme park rides in the village like Dumbo the Flying Elephant and the Mad Tea Party. The Clock Tower also lives in the village as a friendly resident (if you choose the paint path when fighting him). The village appears to be steam powered.

Mickey can gather items or be given quests from the Gremlins living here.

The ticket booth is home to the docks of the Gremlin Village Boat Ride, as well as Wasteland's versions of the Mad Tea Party and Dumbo The Flying Elephant rides respectively. The docks appear to have been relocated here as result of the Clock Tower's sudden madness. This area is decorated by topiaries in the shape of Donald Duck, Dumbo and Oswald The Lucky Rabbit.

Divided into several sections, the boat ride is the star attraction of this area, and takes up half of the overall location. Mickey traverses several sections through Utilidors and Projector Screens.

The opening of the ride, the Jungle Boat Ride is filled with various animal and plant decorations. Giraffes and hippos are scattered around, alongside large palm trees. A few bridges cross over the top of the ride, allowing access to some hidden cut-in rooms. Gremlins Trigo, Hyperion, Habel and Pinza are found trapped in this area.

After passing through a small backstage area, Mickey will arrive in the Asia Boat Ride. Here Mickey will find many iconic landmarks, including the Taj Mahal of India and the pagodas of Japan. The fire bridge lies submerged beneath the Thinner flow, and magic carpets frequent the area.

Eventually, you will reach the final section of the ride. The Colosseum is the gateway to the domain of Glockenspiel, though Mickey will have to navigate many more landmarks, like the Leaning Tower of Pise and the Eiffel Tower, to reach it.

The main residence of the Gremlins. This Thinner-powered hamlet is nestled comfortably within the workings of the World of Gremlins, and acts as home to Wasteland's resident engineering geniuses. Many small rides like the bi-planes and the carpets act as leisure activities for the Gremlins, with the windmill and the Gremlin Clock Tower being the village's distinguishing features.

The home of the Clock Tower from It's a Small World. After the clock went cuckoo, access was restricted, and so it has been left to run down. Usually the most colorful lively area, the thinner had drained the scenery and darkened the atmosphere. It's up to Mickey to help restore or destroy the Tower and fix the World of Gremlins.

Mickey starts in the Slalom area of Gremlin Village, where he must paint a gear to open a door and paint in four steam pipes for Gremlin Tiestow. Next up is a theme park-like place. In this area Mickey must help Gremlin Tim by defeating the enemies that have him trapped in the ticket booth and by repairing the teacup and elephant rides respectively.

After this is the Jungle Boat Ride, this part of Gremlin Village is where Mickey must free four trapped Gremlins not only to have to fight less Sweepers, but also to get a Silver pin hidden in a chest. In the room that separates the Jungle Boat Ride from the Asia Boat Ride Mickey will meet Small Pete who will give him a quest where he will have to find his log in the crashed boat at the main part of Gremlin Village (just following the Asia Boat Ride).

In the Asia Boat Ride, Mickey can raise the fire bridge, restore the magic carpet ride, free three gremlins, and finally open the door leading to the main part of Gremlin Village.

In the village, Mickey has to paint Gus' house, restore the pipe system, get Small Pete's log from his crashed boat, free a trapped gremlin, restore the Village Clock, and open the door leading to the European Boat Ride. In the European Boat Ride, Mickey has two options for to attractions: Use the gears in the Tower of Pisa to repair the Thinner whirlpool or shake the pedestals near the tower to knock it down to form a bridge. For the Eiffel Tower Mickey can ride the clouds or go to the top of the tower and melt the toon supports for it to fall and form a bridge. The main objective is to reach the Colosseum to meet with Small Pete. After that, Mickey will face the Clock Tower and by defeating or redeeming it, Mickey will get to Mean Street.

Notable Residents in the Gremlin Village 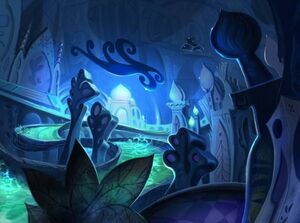 Retrieved from "https://epicmickey.fandom.com/wiki/Gremlin_Village?oldid=37173"
Community content is available under CC-BY-SA unless otherwise noted.