The Gremlins are forgotten creations that appear in Epic Mickey and Epic Mickey 2: The Power of Two.

Primarily British creatures (as it can be seen based on how they talk in the first game and the sequel, especially with Gus), they are medium sized characters with the ability to flit around using their feet, and are able to teleport using an unknown type of magic. They all wear the same attire with a different color scheme, save for Gremlin Gus and Gremlin Prescott (in Epic Mickey 2: The Power of Two) who have some additional pieces on their apparel. All Gremlins have their own wrench ready to use, should the need arise. Whilst Gremlins can walk, they are rarely seen doing so in the game.

In the games, they are an all-male kind.

The Gremlins originated from the children's book of the same name by Roald Dahl published in 1943. The book itself was based off of the mythical creatures that became stories told by the Royal Air Force. Disney was set to produce the film version of the book, but was abandoned for reasons that to this very day were not entirely known, as no one could agree on the reason. The original book became out of print in 1943. Dark Horse Comics later reprinted the book in 2006.

Many of the Gremlins including Fifinellas (female gremlins) were used as insignias during WWII. One was also shown in an episode of Looney Tunes in which it trashes a plane, however, this design was needless to say bearing an extreme likeness to the Disney version, with Warner Brothers agreeing to change the name of two shorts featuring their Gremlin. The only two Gremlins named in the book are Gus and Jamface.

As they had no animations or personality that the game animators could replicate (with the exception of Gus, who had at least a starting point with his personality) they ended up creating their own version of how they are animated and their personalities in the wasteland. For instance, Gus gets scared at Lonesome Manor and hides behind Mickey. They also gave the Gremlins the ability to teleport, as frequently seen after a Gremlin is freed from a cage.

Gremlin Gus is the leader of the Gremlins and serves as a guide for Mickey. Almost like Jiminy Cricket from Pinocchio, he is the one that tells the player all the basic controls and how to do actions.

The other Gremlins can be found trapped in cages around the game, with only a few evading capture. These Gremlins will almost always help Mickey out in some way, though a few of them may require some E-Tickets before they aid Mickey in his quest across Wasteland.

In the beginning of the game, Gremlin Gus rescues Mickey from the maniacal Mechanical Arm in the Mad Doctor's Lab in the Dark Beauty Castle. The Gremlins reside in Gremlin Village, which resembles the It's a Small World ride at Disneyland, Mickey could either help or abandon other caged Gremlins.

Only 4 Gremlins appear in 2D cutscenes: Gus appears in all the cutscenes (apart from the cutscene of the quest "Hook's Machine"), the second one is a yellow Gremlin who appears in Mean Street and is running away the thinner, the third one is Gremlin Prescott in Ostown when he gets out of the safe (provided you rescue him with the Paint path), and the fourth one is the Gremlin at Tomorrow City who informs Oswald that the Moonliner Rocket is broken.

The Gremlins, including Gremlin Gus, make further appearances in Epic Mickey 2: The Power of Two. Warren Spector had mentioned before the game's release that the Gremlins would have a much larger role in the game. In truth, only one of the Gremlins had a larger role overall.

Caged Gremlins reappear with electricity bolts around them that Oswald needs to turn off before Mickey can spin attack it. Gremlin Jamface is also introduced to the player, who plays a slightly larger role than most of the other Gremlins, taking over from Gremlin Markus. Along with Prescott and Gus, he is one of the only Gremlins to appear in an animated cutscene.

Perhaps most notably, Gremlin Prescott has been redesigned, and now has a large role in the game. He is now an antagonist, marking the first and only enemy Gremlin in the series.

Unlike the first game, most generic Gremlins have names based on their clothing, such as Blue Gremlin, for example. More important Gremlins lack this prefix. A look into the game's coding reveals that more Gremlins were supposed to be named. 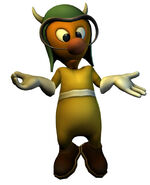 Gremlin Gus and Gremlin Prescott, as seen in Epic Mickey 2

A Purple Gremlin as seen in Epic Mickey 2. 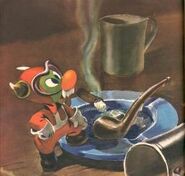 Gus as he appears in the original book 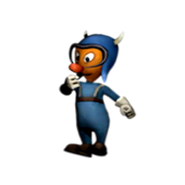 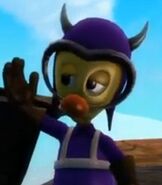 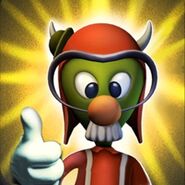 Gremlin Gus from the "Your conscience Be Your Guide" Achievement.
Add a photo to this gallery

Retrieved from "https://epicmickey.fandom.com/wiki/Gremlins?oldid=28194"
Community content is available under CC-BY-SA unless otherwise noted.