Henrietta is an anthropomorphic Cow who lives in Ventureland.

When Mickey arrives at Ventureland, she is seen sitting on the edge of the fountain. When Mickey approaches Damien Salt, Salt comments that he will give his figurehead if he can get Henrietta to love him. When Mickey speaks to her, she mentions that she is lactose intolerant (meaning that she can't drink milk, despite being a cow). She wants flowers to keep her mind off the pirate smell. Should the player choose to give Damien ice cream, Henrietta will reject his advances. If Damien is given the flowers, he will approach her nervously, but she will immediately take the flowers and kiss him.

If Mickey helps play cupid between Henrietta and Damien, then when the pirates return to Skull Island (if Mickey has dealt with the machine), she will want Mickey to get her some ice cream, since the sweet flavor reminds her of her former love - she just won't eat so much of it. If Mickey doesn't deal with the machine, he has the option to clear out the Treehouse to serve as their future home.

As the Tortooga pirates have been driven back into Ventureland's main area by Blackbeard, Damien and Henrietta are a couple. Damien hopes to marry her, but Henrietta's father doesn't approve of him. As such, he calls upon Mickey and Oswald to get him a giant pearl that can be used to access Animatronic Captain Hook's hidden treasure. 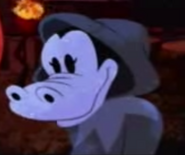 Mickey holding a figurine of Henrietta 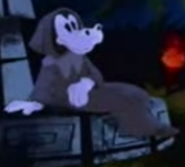 Henrietta sitting on the edge of the fountain in Ventureland 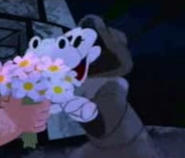 Henrietta about to grab and kiss Damien Salt.

Henrietta as she appears in Epic Mickey
Community content is available under CC-BY-SA unless otherwise noted.
Advertisement