The Jolly Roger is Captain Hook's pirate ship and arena for the boss battle with Animatronic Captain Hook.

When arriving at the Jolly Roger with Smee's boat, Mickey will have to climb through some boxes while avoiding Tick Tock. When finishing climbing, Captain Hook will appear and welcome Mickey to his ship and the battle with start.

In Captain Hook's hidden treasure room (Spin to break the lower-left wall. You'll see a crack in it).

Captain Hook Pin- Shaped like a black heptagon with Hook's hook. Gained if you defeat him by feeding him to the Crocodile or bashing him to bits.

Animatronic Crocodile - Hidden on the opposite side of the ship where you climb the rafts. 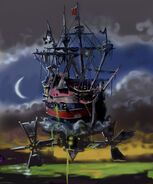 Concept art of both the Jolly Roger and Mr. Smee's boat

Mickey outside the Jolly Rodger.
Add a photo to this gallery
Retrieved from "https://epicmickey.fandom.com/wiki/Jolly_Roger?oldid=35617"
Community content is available under CC-BY-SA unless otherwise noted.