Jumblers were a concept variety of Beetleworx with two pipes, three arms, and six legs that were scrapped from Epic Mickey. In the concepts, they had a spider-like Spinner on top, a Goofy head tithe a mini trident on one of the pipes, a Tick-Tock head on the other pipe-arm, a Jafar head in the middle, an equine mouth with square teeth on the side, a Donald Duck head on one of the legs, a Donald foot on another leg, a boot on the central leg, a Jose Carioca head on yet another leg, a Mickey glove wielding a two-pronged tool one one arm, and a demonic Tigger-like head on another. There appears to be a fleshy outer coat as well. There was also another variation as well, with the only recognizable part being the Mickey ears.

This concept art was part of a wave of concept art images that were leaked before the release of Epic Mickey, and according to Warren Spector, were only created by the concept artists to 'test how dark Disney would let them go with a dark and twisted Disney game'. They were likely never deeply considered for the final game, and would have been difficult to model and animate had they tried to make them a part of the game. 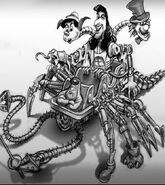 This Jumbler has a cart from the Alice in Wonderland ride from Disneyland as its body.
Add a photo to this gallery
Retrieved from "https://epicmickey.fandom.com/wiki/Jumbler?oldid=33136"
Community content is available under CC-BY-SA unless otherwise noted.