The Blot, Mickey Mouse, everyone in Bog Easy
The Lonesome Ghosts are forgotten characters in Epic Mickey. They are characters from the 1937 animated short of the same name. It's only in Epic Mickey that we actually learn their names:

They appear in Bog Easy, where one of them, Gilbert, introduces them and Ian gives Mickey the optional quest of finding a book that had escaped from Lonesome Manor and return it to the library there; doing so will earn Mickey the "Well Read" pin. When Mickey explores the sunken steamboat and finds a courage medal, Ian offers to give Mickey 200 E-Tickets for it saying that it belongs to one of Bog Easy's residents, Louis, and if he gets his hands on it, then the Lonesome Ghosts won't be able to scare him anymore. Mickey can either accept or turn down this offer. Gilbert says that he will open the gate leading to Lonesome Manor if Mickey helps him scare Louis. All Mickey has to do is thin out the three lamps on the shack to make it dark, and Gilbert will do the rest. However, if Mickey still has the courage medal and gives it to Louis, Gilbert won't open the gate. Metairie will have to do that.

On his way to the projector screen leading to the manor, Mickey learns from Gabriel that they actually live in Lonesome Manor, but when the Pipe Organ there went mad, they were forced to go to Bog Easy. Mickey can either redeem the Pipe Organ or leave it as it is. This can affect the ghosts upon returning. If the Organ was redeemed, they will return to Lonesome Manor. If not, they remain in Bog Easy, force all the residents except Milicent into hiding, and have optional side quests for Mickey, such as helping raise a fishing boat out of the swamp and freeing trapped ghosts.

It's only in the actual manor when Mickey meets the last Lonesome Ghost, Screeching Sam. He's trapped in a bottle in the foyer. When Mickey frees him, he'll wonder how long he was in the bottle, seeing Mickey Mouse in Wasteland. He'll give Mickey instructions on how to get out: Paint in the two skulls to make the Ghosts flow back in, and Sam will open the exit gate. If Mickey follows these instructions, Sam will give Mickey a small empty treasure chest as thanks and exit the manor, though he never makes back to Bog Easy. However, if Mickey exits the manor with the help of Gremlin Haig, Sam's quest is failed and he presumably stays trapped in the manor.

In Epic Mickey 2: The Power of Two:

"IAN- Better pay attention if you want to catch what this ghostly character has to say! Ian, a ghostly creature from Lonesome Manor, is a big brother type to the underdog, but also suffers from a short attention span." -Epic Mickey Facebook page description

Ian appears in Epic Mickey 2: The Power of Two. Here, he is taking care of the Spatters in Blot Alley (it is implied that he appointed himself their keeper because he's one of the only toons in Wasteland who cannot be damaged by the Blotlings, due to being already "dead"). Mickey and Oswald travel over there to follow Gremlin Prescott and to see what he is up to. If Mickey befriends the various Spatters in the alley, Ian will be pleased and award Mickey with a pin. Otherwise, he will be furious and refuse to help.

He is later seen at Fort Wasteland, once again defending the Spatters. If Mickey befriends them all, including the Slobber (who Ian refers to as Deloris), Ian will reward Mickey with a flower hat which can be given to Clarabelle Cow.

In Epic Mickey: Tales of Wasteland:

The Lonesome Ghosts are characters in

the Epic Mickey: Tales of Wasteland digicomics. These comics are a prequel to Epic Mickey and take place before the Thinner Disaster. One Lonesome Ghost (called "Fingers") appears in the background in "The Rubbish Cup". They play a bigger role in "One Scary Night". While the Lonesome Ghosts like to scare people; they themselves become scared of the Bunny Children after being dared by "Ghost Pete" to spend a night at Oswald's house.

One of the Lonesome Ghosts. 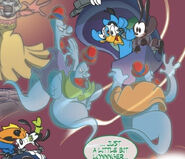 Fingers in The Game's Afoot.