Mickey Mouse, Oswald the Lucky Rabbit and others...

"A second chance is what we all deserve..." ―The Mad Doctor in Epic Mickey 2: The Power of Two

The Mad Doctor originated from the 1933 short of the the same name. In the short, he kidnaps Pluto and tries to put his head on the body of a chicken to see if it the end result of a puppy hatching from an egg will bark, crow, or cackle. Mickey goes into the Doctor's castle to find and save Pluto. Mickey is caught and nearly killed only to realize he was dreaming. The Mad Doctor later appeared in the game Mickey Mania: The Timeless Adventures of Mickey Mouse.

He is briefly seen in a picture in the Roger Rabbit short Tummy Trouble.

Years ago, when the Mad Doctor arrived in Wasteland, his immediate priority was to seek power. Becoming a close partner to Oswald, he constructed the Beetleworx as a construction crew to help improve the land as new arrivals came in.

The Mad Doctor served Oswald by creating Beetleworx who were meant to help out in the Cartoon Wasteland and also created Animatronic versions of Mickey's friends for Oswald. However, when the Blot appeared, the Doctor went over to his side, seeing the Blot as the stronger force. While in service to the Blot, the Doctor created evil Beetleworx designed to attack anything that opposed them. When the Shadow Blot kidnaps Mickey, the Mad Doctor attempts to steal Mickey's heart with the Mechanical Arm, but brutally fails which leaves the player to progress on through the game.

He is seen in Dark Beauty Castle in the opening as explained above and works behind the scenes after that until the encounter with him at Lonesome Manor. He warns Mickey that he has set up defenses and presumably straightly goes to the manor's attic, accidentally leaving behind a treasure chest which holds a Anvil Sketch.

In the game, after Mickey has fought him in Lonesome Manor, it turns out that he had transformed himself into an Animatronic. Apparently, the Mad Doctor found out about the Blot's plan to drain the Wasteland of its Paint. Knowing that only the Animatronics and Beetleworx could exist if that happened, he modified himself so that he could rule whatever remained as their mechanical king. However, Gus took the last rocket part from his pod and this caused it to malfunction which sent the Mad Doctor high into the sky.

"MAD DOCTOR - The Mad Doctor is making his return from banishment in Disney Epic Mickey 2 as a reformed toon. Seeing the error of his ways he offers his help, but the question is, can Mickey, Oswald, and Gus trust their old nemesis? What do you think?" Disney Epic Mickey Video Game Facebook page description.

The story line seems to revolve around the return of the Mad Doctor, who claims he's reformed and wants to rejoin Oswald's forces. Oswald, overjoyed with the return of his friend, accepts him with open arms. However, the citizens of the Wasteland feel reluctant to the whole thing. To see if the Doctor is good or evil, Oswald's girlfriend, Ortensia and Gremlin Gus call on Mickey. Strangely, earthquakes begin to occur all over Wasteland, leaving Mickey to feel a lot more suspicious about the Doctor.

Throughout the game, the Mad Doctor often communicates with Mickey and Oswald over Oswald's remote. When Mickey first meets up with the Mad Doctor, he sings a song about how he has changed and goes off to other areas of Wasteland to assist in repairs. The Doctor is later seen at the end of the Blotworx Dragon boss battle.

Here, the doctor explains he regrets his decision of turning himself into an animatronic, as he is now falling apart. He also expresses his desire to be a toon again. As you get further into the game, it turns out that he has not truly reformed, and plans to become famous again. After fooling Gremlin Prescott into turning against Mickey, Oswald and Gus, he utilizes a television transmitter similar to the one Gus constructs in the opening of the game, and broadcasts his own television show to the Cartoon World, "The Wonderful World of Evil", hoping the ratings there will give him a heart again. To become a Toon once more, he pumps the Guardians from the ground beneath Wasteland in an effort to try and harness their power and get revenge on Wasteland by leaving it in an inert state (his machines were the cause of the surge in quake activity). And with the Brush, he would move to the top of the Disney Villain hierarchy.

At the end of the game, Mickey and Oswald have to face the Mad Doctor against two of his creations, a giant Mechanical claw and a mechanical spider-like robot and release all of the guardians to save Wasteland.

In the Good Ending, Mickey and Oswald save the Mad Doctor from falling into a giant vat of Thinner, then he saves them by using jets in his feet flying out if the lower level of his attraction, and the Guardians turn him back into a toon, and is redeemed. The Doctor sings a additional song entitled, "That's What Heroes Do".  He joins the Mean Street Parade, on the float with all the heroes.

The redeemed and fully-toon Mad Doc.
Add a photo to this gallery

In the Bad Ending, Mickey and Oswald try to save the Mad Doctor, but when the doc tries to pull in Oswald with him, Mickey uses Thinner on the doc, but this time does not come to his senses and laughs evilly at them, and Oswald fires his remote at a nearby switch, which drops the doctor into the vat of Thinner as Turps cover him (preventing the doc from using his jet feet to carry himself to safety), while Mickey and Oswald are carried to safety by the Turps. Likely, he is drowned in all of the thinner and is destroyed.

In the first game, the Mad Doctor, though not fought directly, is the fourth boss while he is the final boss of the second game. To defeat the Doctor, Mickey must either destroy the Beetleworx generators, or reassemble the tracks in the attic. In order to increase Mickey's thinner capacity, the generators that are creating various Beetleworx must be destroyed. To do this, Mickey must shoot thinner at the red lights inside the generator. They are visible only when the doors of the generator open. The door of a generator opens only when a Beetleworx is destroyed and a new one is arriving. Destroying all three generators finishes the battle.

If the player wishes to increase the amount of Paint that can be stored, the gremlin in the Library and the one in the Ballroom must be rescued earlier, as they'll destroy two generators. A TV must be placed on the power trigger and some anvils on some buttons to lower the tracks. The cart on the track can crash into the machine behind the Mad Doctor. Either strategy will also earn Mickey the Mad Doctor Pin.

In the second game, his fight takes place at his new ride and using Paint or Thinner will directly affect the fight as well as his ending. A good strategy for destroying or redeeming him in the second game is to use a watch sketch on both parts to slow the ride down and to slow the Mad Doctor himself down on the second part, giving an effortless chance to fire paint or thinner at the eye on the claw, and on the second part a watch sketch will slow down his attack and will slow down his machine giving you a decent chance to thin or paint in the tiki masks, automatically making to a fast fight.

"Talk about your one-hit wonders. The Mad Doctor made his single appearance as the titular villain in the 1933 Cartoon 'The Mad Doctor.' And even then, he was dismissed as being a simple nightmare conjured up by a sleeping Mickey Mouse.

Well, this nightmare is all too real, but even Oswald would admit that the real-life Doc seems pretty benign in comparison.

Using his masterful skills in cartoon technical design, the Mad Doctor cooked up the Beetleworx, mechanical helpers who aided him in fixing and beautifying Wasteland. If he's got an evil side, he's sure doing a good job of hiding it. Maybe... too good..." (The Mad Doctor's Tales of Wasteland profile)

The Mad Doctor is a character in the Epic Mickey: Tales of Wasteland digicomics. These comics are a prequel to Epic Mickey and take place before the Thinner Disaster. He appears in all the comics except "One Scary Night". He's very cunning, manipulative and quite the brilliant inventor. He pretends to be friends with Oswald and to help the people of Wasteland with his ideas and inventions, but clearly has his own agenda. Ortensia seems to be one of the few that doubt his "good" intentions.

The Mad Doctor: a tall, but slouched man with an evil, bad-looking smile. He uses a white lab robe with a pocket near the waist that contains a knife and scissors. He wears black gloves and shoes and his beard is overgrown with his mustache pointing up. He is bald and has big, black eyes just like his eyebrows.

The Mad Doctor and the Shadow Blot 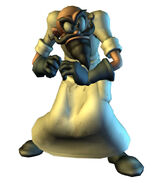 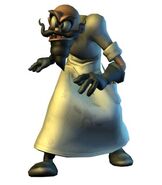 A higher resolution portrait of the Mad Doctor. 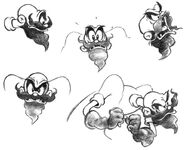 Concept art of Mad Doctor being thinned out into his Beetleworx form.
Add a photo to this gallery 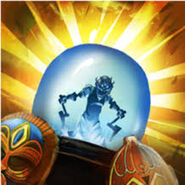 In the Graphic Novel

Mad Doctor in the "Tales of Wasteland" comics

The Doctor's Defeat and revealed as a Animatronic

Retrieved from "https://epicmickey.fandom.com/wiki/Mad_Doctor?oldid=37628"
Community content is available under CC-BY-SA unless otherwise noted.