The Mad Doctor's Ride (or the Mad Doctor's New Attraction) is both, a location and a ride that appears in Epic Mickey 2: The Power of Two and acts as the 3rd and 4th boss. The ride itself works as a doomsday machine for Wasteland (now that it can pull the Guardians out of Wasteland and leave everything in an inert state) although it looks like a Rollercoaster with masks for decorations and a Thinner pool in the middle. Throughout the game, it appears that the Mad Doctor is building it.

The first boss of the Mad Doctor's Ride is a Mechanical Claw controlled by the Mad Doctor. It possesses three attacks: a powerful smash, electricity orbs launched in a quick succession and finally, he can grab you and throw you into the thinner pool. The battle takes place on several platforms that move in a spinning motion. Sometimes, the boss's attacks will thin the platforms, but you can make them reappear by using paint. The boss doesn't have a pattern. You need to either thin or paint the eye in the center of the claw. Befriending or defeating the claw doesn't effect the Mad Doctor's fate.

To befriend the claw, the player will have to paint in the claw when possible. After the claw is befriended, it will volunteer to take Mickey and Oswald to the second boss battle.

To use the Thinner path on the claw, the player will have to thin out its eye when it is vulnerable. When the claw is defeated, it falls down onto the platform and knocks Mickey and Oswald into a thinner whirlpool for the second boss battle. This skips the first part of the Mad Doc Spider fight.

Once Mickey and Oswald are knocked or carried into the thinner whirlpool by the Mechanical Claw, Mickey and Oswald face the second boss: a giant mechanical arachnid (the Spider). You must either thin or paint the masks that are positioned on the top of machine. Once the masks start spinning, Oswald can zap all the masks to make them slow down. When you have dealt with half of the masks, the thinner pool surrounding the area will start to rise. Jump on the platforms near and, once you're safe, repeat the thinning/painting process. When all the masks are painted in/thinned out, the boss will fall down, and the Endgame Cutscene starts, depending about choices you've made in the game. Then the game ends.

The player can go back to the inside part of the ride in the Epilogue by taking the projector screen that went to Tomorrow City in the first game. Once you've defeated the Mad Doctor's Ride, you're free to explore and revisit other worlds to retrieve collectibles you haven't collected yet (such as achievements from Xbox or some pins). 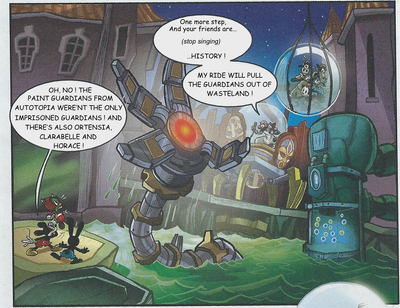 The ride in the graphic novel retelling.
Add a photo to this gallery
Retrieved from "https://epicmickey.fandom.com/wiki/Mad_Doctor%27s_Ride?oldid=36813"
Community content is available under CC-BY-SA unless otherwise noted.