Mean Street (based on the Main Street USA areas of the Disney parks) is the central hub of the Cartoon Wasteland.

According to Gremlin Gus, just before after the Blot's arrival (thanks to Mickey), Mean Street was a bustling burg where Toons went about their lives in relative peace and safety. However, a wave of Thinner devastated the town during the crisis that heralded the Blot's arrival. It has since recovered, though major evidence of the damage yet remains, and the morale of the town remains low.

Within Mean Street are several shops and buildings and a statue of Walt Disney holding Oswald's hand instead of Mickey's, much to the mouse's surprise and disappointment. It is revealed in the artwork that there is a machine under Mean Street to clean up the Thinner caused by the Thinner Disaster.

In Epic Mickey, Mean Street serves as a hub world. Mickey is able to buy goods, complete tasks for its residents, and advance to other worlds through Projector Screens. Throughout the game, Gremlin Markus tasks Mickey with acquiring Power Sparks to power additional Projector Screens. Once Mickey collects 30 Power Sparks, talks to Gremlin Markus again after opening the last projector, the secret Walt's Apartment above the Fire Station next to City Hall is unlocked.

After the Blot is defeated, paint rains down on Cartoon Wasteland and restores everything, including the inert parts. Mean Street is also fully restored along with the rest of the areas. Tons of citizens from all over come to celebrate down near the train station with the now-restored Wasteland.

Mean Street has been hit by a series of massive earthquakes by the events of Epic Mickey 2, so much so that the ground has split apart and divided the town into two parts - South and North.

Mean Street North is the place where you go to other places (now that Mean Street South only has the train station and the entrance to the Underground) because of the projector screens and the Cinema (which can take you through any projector you have gone through). Here you have: the Camera Shop, the Ice Cream Parlor, the Pin Trading Company, the Penny Arcade, the Cinema, and the D.E.C. to OsTown. 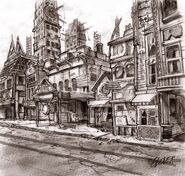 Some concept art of Mean Street in Epic Mickey 2: The Power of Two.

Untextured model of the Train Station