Mizrabel was the main villain of the classic Castle of Illusion starring Mickey Mouse video game which came out in 1990.

In Castle of Illusion, Mizrabel kidnaps Minnie Mouse to drain her of her energy and beauty, and Mickey Mouse has to venture through her castle to rescue her. At the end, Mickey defeats her and she is reformed, ultimately saving him and Minnie as the castle falls apart. She did not make any appearances after the game. She would eventually become a forgotten character and a resident of Wasteland, along with her Castle of Illusion. Mizrabel would later return as the main antagonist of Epic Mickey: Power of Illusion.

In the Epic Mickey seriesEdit

Mizrabel reappears as the main antagonist of Epic Mickey: Power of Illusion and a forgotten character in Wasteland. She finds herself as an unwilling inhabitant of Wasteland, and unleashes a plot to escape using the Castle of Illusion to imprison and drain the cartoon essence from currently famous Toons still in the Toon World.

Mickey first meets her in Castle East Hall, where she taunts him with Minnie imprisoned behind her whilst stealing Maleficent's appearance.

In ???, Mickey finds her again and battles her in the final showdown. Mizrabel will take the form of Maleficent in her dragon form, and either reach her head down to bite Mickey, or burst out a set of green flames which reach across both sides.

Mickey needs to Paint in the surrounding thorn bushes when her head drops to the ground, then attack her whilst she's stunned. When she attacks with the flames, Mickey needs to paint in the thorn bushes again as a defense shield. Depending on how well the bush has been painted, it may need to be thinned out as the flames reach above, making it impossible for Mickey to move past them.

After her defeat, she informs Mickey that this isn't the last he's seen of her, and vanishes. 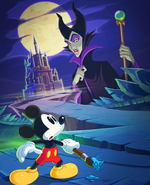 In the 2013 Castle of Illusion remake

In the 2013 Castle of Illusion remake, after reforming

In the original Castle of Illusion

Retrieved from "https://epicmickey.fandom.com/wiki/Mizrabel?oldid=32504"
Community content is available under CC-BY-SA unless otherwise noted.