The Nautilus is a submarine from 20,000 Leagues Under the Sea that appears in Epic Mickey as well as being the name of the first level in Tomorrow City.

It rests in a partially-exposed cavern filled with ancient ruins and broken monorails, based on the architecture in Atlantis: The Lost Empire. When first visiting Tomorrow City, Mickey is directed here from the Plutopia projector screen on Mean Street. Animatronic Goofy was working on fixing a mechanical system to raise the Nautilus before the Mad Doctor broke him. Mickey can either free Gremlin Starr and allow him to raise the Nautilus for him it for him or raise it himself by painting in the gears at the top of the mechanism. Once it has surfaced, Mickey and Gus sail it to Tomorrow City lagoon. 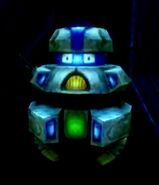 Vincent Cameo in the small temple.
Add a photo to this gallery
Retrieved from "https://epicmickey.fandom.com/wiki/Nautilus?oldid=33319"
Community content is available under CC-BY-SA unless otherwise noted.