Ortensia is a Disney character that first appeared in the 1927 Oswald the Lucky Rabbit short: "The Banker's Daughter" and the 1928 short "Harem Scarem" as Oswald's love interest. (based on artwork for posters and a model sheet.) However. These two shorts are "lost" at this point in time and thus she is more well known for her role in Oswald shorts like "Oh What a Knight!" , "Rival Romeos" and "Sky Scrappers" that still survive today. 1

She is voiced by Audrey Wasilewski in a strikingly similar manner to Russi Taylor's voice for Minnie Mouse.

Ortensia has had several names in her career. Most were barely used in the Oswald cartoons. She went by the name "Sadie" in the Disney shorts. The Oswald short title "Sagebrush Sadie" was one of the few times her name was used. Later, In the Lantz shorts, she was called "Kitty".

During the production of Epic Mickey, she was given her current name "Ortensia". This was done to mirror other famous Disney pairs that share the first letter in their name: Mickey and Minnie, Donald and Daisy, and thus Oswald and Ortensia despite that she isn't of the same species as Oswald. Also, Ortensia is the Italian name for the Hydrangea flower; gardening, indeed, seems to be one of her hobbies in the "The Game's Afoot" digicomic.

Ortensia was Oswald's beloved queen consort of the Cartoon Wasteland. In the main story, Ortensia's Paint was removed when the Blot was sealed, and she was in a catatonic state. In this statue-like state, she couldn't move and her voice is heard only faintly in one of the cutscenes. Still, she has some impact on the plot of Epic Mickey even in this state. Her state leaves Oswald and several Bunny Children in her house in sadness, but many times, the memory of her leads to Oswald acting nicer to Mickey than usual, as it is what she would have wanted.

For example: The first time Oswald calls Mickey by name is when Mickey returns her locket to Oswald. The first time Oswald tries to start over with Mickey (on top of Mickeyjunk Mountain) is because "Ortensia would want me to be more friendly". Oswald and Mickey even forgive and make peace with each other when Mickey sees her and Oswald on the top of Dark Beauty Castle. Like Oswald and Gremlin Gus, Ortensia was consumed by the Blot afterwards.

However, after Mickey defeats the Blot and gets his heart back from Oswald, Mickey returns to his world, while Wasteland begins to regain its former state. As this happens, the Queen's paint returns to her old self (in other words, regains her paint), and she happily reunites with Oswald as she kisses him all over his face. In the end, Queen Ortensia gets a chance to temporarily meet Mickey through a mirror that was created by Yen Sid.

Oh What a Knight!

Ortensia can be seen near the same balcony that Oswald saw her in the 2D projector screen level of Oh What a Knight. She throws hearts that Mickey can he use to jump onto the balcony to collect the Film Reel.

Epic Mickey 2 : The Power of Two

"ORTENSIA - The motherly toon universally respected and revered by all! No matter what the danger may be, you can be sure that she will do whatever it takes to protect her family!" Disney Epic Mickey Video Game Facebook page description.

Ortensia returns in Epic Mickey 2: The Power of Two, first appearing in the 2D cutscene that functions as a recap of the original Epic Mickey. After that, the scene changes to Oswald strolling down the street of a recently restored Wasteland. Just as an earthquake begins to shake the street apart, the Mad Doctor and his Beetleworx creations arrive on the scene in a twisted sort of take on the Main Street Electrical Parade. The Doctor sings a stirring musical number, using the refrain "Help Me, Help You" to convince Oswald to join forces with him to save the Wasteland. While first confused about the Mad Doctor 's arrival, the Queen tries to stop Oswald from joining the Mad Doctor as she doesn't seem to trust him. However, Oswald has already been convinced and joins him, much to her annoyance. Angry and still not trusting the Mad Doctor, she leaves with Gus as Oswald leaves with the Mad Doctor, who explains to him that the kingdom is under attack by evil creatures that are part-Blot and part-animatronic.

She and Gus go back to Dark Beauty Castle where Gus creates a machine to contact the Cartoon World. A comically impatient Ortensia walks around, is eagerly waiting and eventually falls asleep as Gus finally finishes the machine, enabling them to again reach out to Mickey to set things straight.

While the Queen is waiting for her king to return in the castle, Mickey re-enters Wasteland by falling through a window of Dark Beauty Castle, where he meets Ortensia and Gus who explain the current situation of Wasteland and the return of the Mad Doctor to him until Oswald arrives. A worried Ortensia happily greets him, glad to see him safe. Oswald explains that the Doc told him about the Blotworx and that the creatures are going to attack them. Ortensia still doesn't trust the Mad Doctor, but Oswald is convinced that they should give him a second chance. Mickey suggests they go find the Mad Doctor, when a quake starts and the castle begins collapsing all around them. When some rubble comes down and separates Ortensia from the others, Mickey, Gus, and Oswald outrun the rubble to escape the castle and reunite with the Queen, who (in her own words) had her own adventure escaping the castle, much to King Oswald's amusement. Eventually all four escape by train.

When they arrive in Mean Street Station and enter Mean Street, Ortensia and the others find the Mad Doctor. The Mad Doctor sings about changing his ways and the new dangers that threaten Wasteland, but Queen Ortensia remains unconvinced about his good intentions. When the Mad Doctor leaves, Ortensia tells her husband to go ahead as she'll wait until the Ostown projector starts working. She worriedly asks him to be careful as he kisses her. The scene ends with Ortensia wishing her "hunny bunny" good luck and leaving.

Ortensia will eventually travel to Ostown and find the Bunny Children missing and scattered around Wasteland. Resulting in her giving Oswald and Mickey a quest to return the Bunny Children to her so she can take care of their kids.

According to Warren Spector: Oswald's significant other, Ortensia, 'is a character from start to finish that you interact with a lot.' However, if you choose to follow the game through, you barely interact with her at all after Dark Beauty Castle.

The Graphic novel shows in more detail how Ortensia was turned

into her statue-like state. She and Oswald made one final effort to get rid of the Blot by sealing it in the Thinner Jug on Mickeyjunk Mountain that fell in Wasteland when the Blot first appeared. The Mad Doctor warned the Blot, but Oswald succeeded in grabbing the Blot's attention. He was too good a target for the Blot to resist. Oswald was ready to sacrifice himself, if it meant the end of the Blot Wars, but Ortensia wasn't ready to allow that. So when the Blot attacked Oswald, she pushed him away to safety and Ortensia fell victim to the Blot instead, transforming her into her statue-like state. "Oswald's silent scream was heard from one end of Wasteland to the other", but he had enough presence of mind to successfully trap the Blot by jamming the stopper into the bottle. Sadly, it didn't end the war. The Blot's minions were still loose upon the land under the guidance of the Mad Doctor and the Shadow Blot, the Blot's most fearsome minion. None of which mattered in the least to Oswald. By losing Ortensia, "his entire reason for living had been obliterated by the Blot".

"Ortensia is Oswald's one true love. Her dedication to Oswald is absolutely unstinting, but she's nobody's pushover. She's no-nonsense and direct, and will not hesitate to let anyone - most of all Oswald - know exactly what's on her mind.

Whether she's busy fending off unwelcome advances from the notorious Pete or wishing that Oswald would spend more time with her and their copious children, Ortensia is - in every way - Oswald's better half. Now if she could just get him to stop obsessing about Mickey and thinking more about her!"' (Ortensia's Tales of Wasteland profile)

Ortensia is one of the main characters in the Epic Mickey: Tales of Wasteland digicomics, a prequel to Epic Mickey that takes place before the Thinner Disaster. She appears in five of the six digicomics.

She makes a small cameo in "Clock Tower Cleaners", but has larger roles in the other comics: from getting unwanted attention from Pete in "The Game's Afoot", visiting the Misadventurers club in "The Rubbish Cup", or simply being together with Oswald and their kids in "Oswald the Lucky Duck" and "There's a Hole in the Sky".

Ortensia loves Oswald and is very dedicated to him. She's very caring, but also sensible, realistic and direct. She's one of the few who suspects the Mad Doctor's bad intentions, something Oswald is quite oblivious to. She's not afraid to share her opinion on things, but she'll support Oswald when he's truly dedicated to something.

In Epic Mickey 3, Ortensia was supposed to be a playable character. this was idea was scrapped when Junction Point shut down in 2013. Ortensia would be able to fly for a couple of seconds like Oswald and then float down using her "parachute". She would also be slowly turned to stone.

Oswald and Ortensia sitting together on their bench with some birds 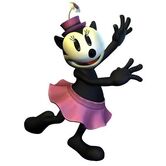 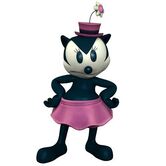 An annoyed Ortensia- Epic Mickey 2: The Power of Two artwork. 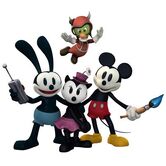 A worried Ortensia looking at Oswald.

Ortensia has a serious distrust of the Mad Doctor. 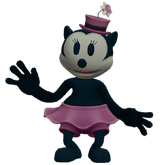 Oswald is reduced to tears when he finds Ortensia 's statue-like remains. " His entire reason for living had been obliterated by the Blot." EM Graphic novel.

In "The Rubbish cup" 's Misadventurer 's Club (Wasteland version of the Adventurers Club) Ortensia is Samantha and Clarabelle is Pamelia. Both dressing like their counterparts.

Poster of "The Bankers Daughter" Ortensia's first appearence as "Sadie". 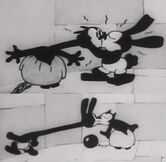 Oswald and Ortensia kissing while stretching their necks to crazy lenghts

A pencil sketch of Sagebrush Sadie. Oswald and Ortensia / Sadie on a stagecoach.

Ortensia aka Sadie on her bicycle selling "box lunches" in "Sky Scrappers". Aside from color. She looks identical to how she looks Epic Mickey.