OsTown is one of the most well known places in Epic Mickey and Epic Mickey 2: The Power of Two.

It is Oswald's version of Mickey's Toontown of the Disneyland theme park, at the foothills of the imposing Mickeyjunk Mountain. Ortensia's, Clarabelle's, Mickey's and Pirate Moody's homes are located here. In the center is an Oswald fountain, which is now pouring with thinner. Here, who you will come across is Animatronic Goofy. He will ask you if you will find his spare parts. This is also where Gremlin Prescott can be found. If you accept, you will find them in Tomorrow City.

The Telephone in Mickey's house (next to Moody's) has the wrench. You can either let Prescott go in and take it from him, which in the process the Telephone is dismantled, or accept the quest to restore the telephone lines in OsTown. By doing the quest, you can unlock another telephone quest in Mickeyjunk Mountain.

To restore the telephone lines, you need to paint in the four fuse boxes. They are located:

After Prescott has regained his wrench, he will lower the bridge and reveal the Projector Screen to Mickeyjunk Mountain.

You can also get several Power Sparks in town. Thin out the Gag Factory for Abner (who looks similar to Goofy) in front of the factory to get one. A second one is on Mickey's roof, while a third one can be found on top of the Gag Factory, hidden under the chimney. Gilda will appear later on the bridge to Mickeyjunk Mountain, who will offer you a race (again). If you succeeded, she will give you a Power Spark. There is also a glitch, where if you tap the A Button as fast as possible, after completing a race, she will give you the challenge again. So if you return her Axe, and take the two races, including the glitch race, you can obtain a whopping three Power Sparks from Gilda in Ostown alone.

Later, after you get a gear in Bog Easy, you will be able to get Moody to raise Donald's tugboat, which has sank in the thinner river.

OsTown returns as a hub world with certain changes; there is now a Train Station that can transfer you to Mean Street South, Bog Easy, or Ventureland (though you must repair the stations first in order to do so). Transportation to Mickeyjunk Mountain, however, is no longer accessible due to the earthquake damaging the mountain; it's deemed too dangerous to go to Mickeyjunk.

When you first arrive at OsTown, Gremlin Prescott will quickly hide something from Mickey, Oswald and Gus in a cutscene. Here, he'll explain that the D.E.C. to Rainbow Falls is down a Thinner sinkhole, and that Gremlin Jamface gave Goofy some pumps, but it would take too long to process them. He showed Goofy how to do the job much quicker, though as evident by Goofy's holler, it turns out that something went wrong. Once Goofy hands Mickey the Fairy Sketch, Mickey is given the choice to either repair the pumps Goofy/Jamface's way (by repairing all 3 pumps) or Prescott's way (by supercharging one pump). Either way will reward you with a pin, but Prescott's way will damage the fountain permanently. You can return later to find many quests from the residents: Moody, Clarabelle, Ortensia, and Goofy. A Green Gremlin will also take over Prescott's job in the Gag Factory after a while, and he will require Scrap Metal to fix up OsTown. 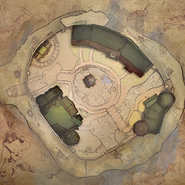 Map of OsTown from Epic Mickey 2

Concept of Ostown from Epic Mickey 2.

A full veiw of Ostown in the first game.
Add a photo to this gallery
Retrieved from "https://epicmickey.fandom.com/wiki/OsTown?oldid=33370"
Community content is available under CC-BY-SA unless otherwise noted.