The Paintbrush is the main weapon in Epic Mickey and Epic Mickey: Power of Illusion and one of the two main weapons in Epic Mickey 2: The Power of Two. It is first found in Yen Sid's workshop, fueled by Paint, which is used to befriend enemies and paint in invisible/thinned out objects; it is also fueled by Thinner, used to thin out enemies and thin out painted objects. Both substances are used in solving and completing challenges and quests.

Originally, Yen Sid owned the brush and used the Paint to bring the world of lost and forgotten characters to life, and Thinner to clean the paint off the brush once finished. Unfortunately, Mickey used the brush to create the Blot (inadvertently). A long time later, as the Blot kidnaps Mickey, he grabs the brush just before he's sucked into the Wasteland.

Mickey drops the brush when he lands, but when the Blot challenges him, Mickey picks it up and brandishes it, scaring it off.

Later, when Mickey and his new friend Gus are escaping Dark Beauty Castle, Mickey wonders why the Blot was scared of the brush. Suddenly, Mickey accidentally shoots a stream of Thinner, melting part of a wall. Mickey wonders what else the brush can do and shoots out Paint, restoring the wall. Gus then explains how to control the brush and use it for either good or bad purposes.

Mickey then goes on through his adventure using the brush to paint/erase things and fix Wasteland. When Mickey, Oswald, and Gus blow up the Blot, Mickey is sent back to the Real World and is immediately caught by Yen Sid. Mickey sheepishly returns the brush.

After Yen Sid takes Mickey to return to his house via the Magic Mirror, but the wizard happily and see his creations to good job then fires some sort of orange magic out of the brush at the mirror, somehow causing it to show Wasteland, allowing his former apprentice to reflect on the consequences of his actions. This is the last time in the game that the brush is seen, as Yen Sid returns the mirror to normal using his own magic.

In actual gameplay, the brush is slightly larger and thicker than a normal-sized round-tipped paintbrush. It has a light-brown wooden handle, a gray metal waterguard, and dark-brown bristles. In the beta models/screenshots/E3 demos, there was a splash of blue Paint on the upper half of the bristles and on the very tip there was a hint of yellow Paint on top of the blue. In the final game, the bristles were clean, possibly due to the fact that Paint remaining on the brush after using Thinner wouldn't have made sense.

In the opening and ending 3D cut-scenes, the brush actually looks ﻿different. It's a normal-sized round-tipped paintbrush. The handle is green, the waterguard is longer (a third of the brush's length) and golden with a zig-zag. The bristles are still dark-brown.

The brush only has a small cameo appearance in the regular digicomics: In the hands of Yen Sid as he fixes the Thinner-caused hole that Oswald tried to escape through. The brush is very different here: instead of being a regular-sized round-tipped paintbrush, it's a regular-sized flat-tipped paintbrush. The handle and waterguard are the same as the gameplay version of the brush, but the bristles are flat and white. Also, when Yen Sid fixes the hole, the paint on the brush is black.

In the graphic novel retelling of the game, the brush is the same as in the actual game, but much longer than even Mickey. Gus recognizes the brush as magic at first glance, claiming that if it's magic, a Gremlin knows it. However, the Paint/Thinner concept works differently: the brush produces Thinner when Mickey wields it in his left hand, and Paint when the mouse wields it in his right. The brush, used with paint, also allows Mickey to create Toon Objects by painting them in 3 dimensions in the air, which he uses only once in the story, to create an anvil for smashing the gramophone which, inside of the Clock Tower, constantly plays the "It's a small world" theme song.

Mickey has the option of using two substances with the brush. Mickey will point and fire the substance at an enemy, NPC, object or building depending on the player's preference. Mickey can also swing the brush to sweep away enemies who get too close to him.

Mickey can fire off the aforementioned substances in two different ways: 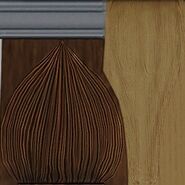 Paintbrush texture in Epic Mickey 2
Add a photo to this gallery
Retrieved from "https://epicmickey.fandom.com/wiki/Paintbrush?oldid=31272"
Community content is available under CC-BY-SA unless otherwise noted.