Petetronic is the second boss of Epic Mickey, and is Tomorrow City's version of Pete. He was sent to the Wasteland to protect Tomorrow City, but he was scared after the Blot's attack and went mad. He is based on Tron from the film franchise of the same name though as seen in this screenshot he takes the appearance of Sark during his boss fight.

He is voiced by Jim Cummings.

In the boss battle with Petetronic, he has two containers on his shoulder-blades. If Mickey wishes to increase his Paint capacity, he will need to redeem Petetronic by filling one of two containers on Petetronic's shoulder-blades with paint, steadily removing parts of his armor and making him an ally. Every time said container is filled with Paint, the shining red lines on his body will turn blue. It will also earn Mickey the Redeemed Petetronic pin from Big Bad Pete in Mean Street. In his Good Ending, Petetronic will be seen riding the Rocket Ride with some Gremlins.

If he uses Thinner, he will become more and more vulnerable to his own disk attack, and eventually succumb to it once the Thinner container is full, and the lines on his body also start to turn green. Performing the Thinner-based strategy increases Mickey's Thinner capacity once it is the "End of Line" for Petetronic and earn Mickey the Defeated Petetronic pin, again from Big Bad Pete in Mean Street. But Mickey should be careful when trying to fill him with paint or thinner, though: he'll shoot more balls of thinner at him if you does. If Mickey defeats Petetronic, Pete will be furious, but will still give Mickey the Defeat Petetronic Pin. In his Bad Ending, a virtual image of Petetronic, still twisted by the Blot, appears on a TV screen, scaring away some Gremlins, having survived his battle with Mickey through virtual use. Alongside the rest of the Petes, his ending represents the ways in which we treat others.

Petetronic makes a return in Epic Mickey 2. He appears in Blot Alley, where he watches over the entrance of Club 13 and opens the door which slams into Oswald, making him dizzy. After explaining where Gremlin Prescott disappeared to (and confirming that no one gets past him into the Club), two Blotworx Rockers and a Blotworx Blocker arrive on the scene and Petetronic asks the heroes to get rid of them. Then the Blue Gremlin will come and help (if you find him in Blot Alley), repair the machine and open the doorway. You can just go to the projector screen, or stay and help fight off the Blotworx. After that he gives them a reward should they help him, and also comments that they're 'not as bad as Big Bad Pete makes them out to be'.

If you do not help him, he'll appear in the end of credits scene with all the other Petes in the Bad Ending. In the Good Ending, he is strangely absent.

Petetronic and the Gremlins in the Good Ending

Pete outside Club 13
Add a photo to this gallery 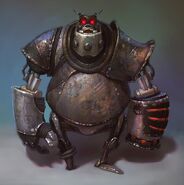 Another early design of Petetronic 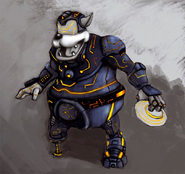 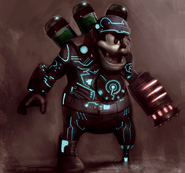 Retrieved from "https://epicmickey.fandom.com/wiki/Petetronic?oldid=34069"
Community content is available under CC-BY-SA unless otherwise noted.