This article is about the original black-clad Toon who was supposed to appear in the game but was removed. For other uses of the word "Phantom Blot", see Phantom Blot (Disambiguation).

The original Phantom Blot is a hooded criminal mastermind with an ink blot as his calling card. The archenemy of detective Mickey Mouse in Mouseton, he first appeared in 1939 in the comic strip serial Mickey Outwits the Phantom Blot.

The character served as the main inspiration for the Blot in the game, though they are actually very different characters. For a long time during the game's development, its Blot was still referred to as "Phantom Blot", and there were also talks of the comics' Phantom Blot having a cameo in Mean Street Jail as a reference to the Blot's origins.

In the 2019 crossover comic story The Blot and the Blob, the comics' Phantom Blot met the Epic Mickey Blot after messing with an artifact that opens gateways to alternate dimensions.

Before they settled for the current, demon-like appearance of the Shadow Blot, this "Phantom Blot" went through many designs, of which three were reminescent of the original hooded Phantom Blot:

Later, once the Shadow Blot became a character of its own, the original Phantom Blot was supposed to be used separately as either of the following:

This concept art for the Shadow Blot (at point where it was still called the Phantom Blot) is reminiscent of the original Phantom Blot.

A hooded creep with 3 looks that are probably based on the idea of the 3 Mickeys. 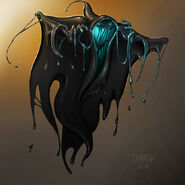 Yet another concept art of the Blot as the Phantom Blot. Here, his cloak resembles that of the Evil Queen's hag form.

The comics' Phantom Blot meets the Epic Mickey blot in The Blot and the Blob.
Add a photo to this gallery

Retrieved from "https://epicmickey.fandom.com/wiki/Phantom_Blot?oldid=31995"
Community content is available under CC-BY-SA unless otherwise noted.