The Pirate Conversion Machine (AKA Hook's Machine or the Machine) is a machine built by the Mad Doctor located in Skull Island. While similar-looking machines produce Beetleworx, this machine (as the name says) is to convert the cartoon pirates into Bashers.

While in Ventureland, Mickey Mouse and Gremlin Gus learn from Smee that the reason he and several of his pirate crew are in Ventureland is that they're hiding from their former crewmates, who are being turned into robots by a machine in their former home, Skull Island. Gus encourages Mickey to see to the machine while they look for the second Moonliner Rocket Part.

When Mickey and Gus arrive in Skull Island, they immediately see the PCM, which is unleashing an unlimited number of Bashers. However, the two are only there to raise Smee's boat and find Hook. His Machine is optional.

Should Mickey choose to interact with the Machine, he needs to find the four Paint and Thinner Pumps that are connected to it. Two are located on the right side of Skull Island, while one is on the left side and the last one on the upper level. If Mickey fills all four of these Pumps with Paint, the PCM gradually reverses until it converts the Bashers into pirates instead of the other way around. If he fills all four with Thinner, the Machine breaks, but it can't un-convert any of the pirates. If Mickey tries to fill a Pump with the opposite substance that he used in a previous Pump, Gus will stop and warn him, but after that Mickey can do it anyway. If the Pumps are filled with combined mixtures (regardless of the actual combination), the PCM jams, preventing Mickey from fixing OR destroying it. If Mickey talks to Pete Pan on top of Skull Island later, he will comment on what Mickey did or didn't yet do with the Machine (It's from Pete Pan that the Machine's actual name is revealed).

Mickey fighting a mechanized pirate in Tortooga's jungle caused by the conversion machine. 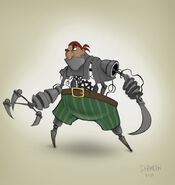 A example of a mechanized Pirate. Although, this is scrapped concept.

Another scrapped concept for Animatronic Pirate.
Add a photo to this gallery
Retrieved from "https://epicmickey.fandom.com/wiki/Pirate_Conversion_Machine?oldid=33358"
Community content is available under CC-BY-SA unless otherwise noted.