Playing Cards are residents of Mickeyjunk Mountain and assist Oswald in guarding his sanctuary and by extension the bottle containing the Blot. Notable ones are Decker, a five of spades who operates the crane at the bottom of the mountain, Jack Trade, a three of spades who keeps the door to Oswald's sanctuary closed, and the Ace of Spades, who tests Mickey in three trials before he allows him to see Oswald and considers him a greater hero than Mickey.

One of the playing cards appears as a skeleton in Epic Mickey 2.

The Playing Cards in their original appearance in Thru the Mirror. 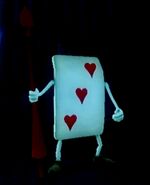 Three of Diamonds
Add a photo to this gallery
Retrieved from "https://epicmickey.fandom.com/wiki/Playing_Cards?oldid=32612"
Community content is available under CC-BY-SA unless otherwise noted.