Genderless, referred to as male

The Mad Doctor, The Blot

The Shadow Blot is the lookalike version of the Blot and acts as the penultimate boss of Epic Mickey. Depending on which path the player takes, the Shadow Blot can either be erased from existence with Thinner or redeemed with Paint.

Even if Mickey befriended him in the first game, he strangely doesn't appear in Epic Mickey 2: The Power of Two, making it seem as though the Thinner path has been chosen as the canon path for the storyline.

The Shadow Blot was created after the Blot was trapped in the Thinner Bottle atop Mickeyjunk Mountain by Oswald and Ortensia. Unfortunately for Wasteland, the seal was not completely sound, leading to drippings of the shadow creature to escape the entrapment. These drips formed into Blotlings. The largest of these was the Shadow Blot, who was subsequently the most powerful and often mistaken for the real Blot.

The Shadow Blot then took over the real Blot's role as leader of the lesser Blotlings, and eventually usurped power from Oswald. Seeing that this new entity would help him achieve his goals, the Mad Doctor allied himself with the new ruler, abandoning the now alone Oswald. Eventually, after a period of degeneration in the ravaged Wasteland, the Shadow Blot somehow was able to temporarily leave Wasteland (although his lower half was still chained to the world), travel through Yen Sid's mirror, and drag Mickey into the retired cartoon world in order to steal his heart and permanently free his master (the real Blot). Their plan fails, however, when Mickey escapes his bonds. The Shadow Blot immediately gets between the mouse and the Mad Doctor, but flees when Mickey raises the magic paintbrush.

For most of the game after this, the Blot works behind the scenes, organizing and commanding the Blotling army. This remains the case until Mickey and Oswald gather the parts for a rocket to escape Wasteland. It is then that the Shadow Blot leads the entire Blotling army up Mickeyjunk Mountain, as a full-scale attempt to free their master. Mickey, Oswald, and Gremlin Gus meet the challenge, scaling the mountain to strike down the freeing of his master (the real Blot). As Oswald desperately tries to keep the bottle prison corked, Mickey faces the Shadow Blot in battle at the summit.

The Shadow Blot's boss battle strategies for using either Paint or Thinner are the same, besides the weapon of choice. At the first time, he will throw some Thinner at you, which you can avoid easily. Spraying Thinner or Paint will do nothing. He will then charge some Thinner on both of his hands and fly away. He will shoot some Thinner from above repeatedly. After that, he will slam into the ground (you can see his shadow on the ground to avoid him) and try to inhale you, similar to what Slobbers do. This is where you can spray him with Paint or Thinner. You will notice that he will get covered by some Paint or Thinner. Next, he summons some Spatters. They're annoying, so try to get rid of them quickly. The Shadow Blot also become more powerful, as he can throw Thinner faster than before, especially when he's flying above you. Sometimes, he will also try to knock you out. Avoid his Thinner shots and keep attacking him with Paint or Thinner.

If Mickey decides to battle the Blot with Thinner, he must slowly erase the villainous commander. Mickey is eventually successful and the Blot melts away, clawing at the ground as he fades. The Thinner battle earns Mickey the Shadow Boxing pin. If you look closely, it shows that Mickey moves his head down and shakes his head slowly, as if he's saying, "What have I done?".

If Mickey chooses Paint as his weapon, the heroic mouse must slowly but surely cover the beast in blue, while avoiding his attacks and underlings. Once finished with this, the Blot rises into the air and blows all of the Paint off of himself in an energy blast and is seemingly about to destroy Mickey; however, the Paint had already soaked into his core, changing his character. Now friendly, the Shadow Blot lifts Mickey into the air and tickles and cuddles him affectionately. Gus quotes, "He's actually kinda... sweet." He then flies off in a wave, assumed to be departing for a new life in Wasteland, likely heading for Blot Alley. This version of the battle earns Mickey the "Me and My Shadow" pin.

Render of the Shadow Blot from The Art of Epic Mickey

Render of the Shadow Blot and the Mad Doctor 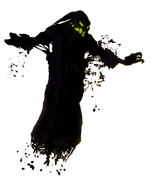 The Shadow Blot covered in Thinner 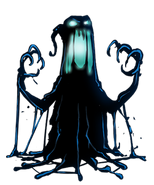 Artwork of the Shadow Blot from the Digicomics
Community content is available under CC-BY-SA unless otherwise noted.
Advertisement