This article is about the forgotten version of Smee found in the main games. For the character living in the Toon World, see Smee (Power of Illusion).

Smee is a Pirate character from the classic Disney film Peter Pan and was Captain Hook's right hand man.

Smee is first seen crying in the hub-world of Ventureland. He explains to Mickey that he and the other pirates have left the Pirates of the Wasteland region because of a machine that turns pirates into Beetleworx Bashers. He will hand Mickey Mouse the mission to stop this machine that is turning pirates into robots in the mission world, Pirates of the Wasteland. If Mickey manages to either destroy or reverse the machine, Smee will leave Ventureland to return to Tortooga. If it was left alone or that the pumps were filled with Thinner for each one, they remain in Ventureland. He is last seen celebrating with the other Wasteland toons at the end.

"Smee - The second mate of the Jolly Roger, he is soft-hearted, but that doesn't change the fact that he is a pirate - as fond of treasure as any of them." Epic Mickey Facebook page description

In Epic Mickey 2: The Power of Two, Smee returns once again in Ventureland. His role in this game is significantly less than the previous game. He will request that Mickey locate Animatronic Hook's clothes.

Smee telling Mickey and Gus about the Pirate Conversion Machine in an E3 screenshot.

Ventureland in Epic Mickey 2. Smee can be seen in the lower left.

An unused blue shirt Smee from a test animation reel 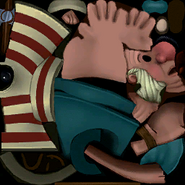