Mickey Mouse and other Toons

Sweepers are Blotlings that largely resemble the Brooms from Fantasia. They carry buckets of thinner to throw at Mickey, and will sweep him away if he gets too close. Like other Blotlings, they can be befriended by Paint and be destroyed by Thinner and require only one guardian to befriend or destroy them. They are first met in the Jungle Boat Ride in Epic Mickey 1, and in Rainbow Falls in Epic Mickey 2. They are part of the Blot's Blotling Army.

Sweepers have two major attacks, throwing Thinner at Mickey and knocking him backwards, similar to the Spatters. The best way to attack a Sweeper is to spin attack it and then spray it with paint, as this neutralises both of it's potential attacks. You could also try shoot Paint or Thinner at it from a distance, although this gives more opportunities for the Sweeper to throw Thinner back at you. Another thing to be careful of is the Sweeper thinning out the floor, as Mickey can easily fall to his death if this happens. This is most noticeable in areas such as the European Boat Ride but it can happen anywhere in the game, as long as there's a toon floor.

One easy way to prevent this happening is to place a TV Sketch from a distance, as it'll distract the Sweeper, allowing you to close the gap. The best option is to thin a Sweeper, as it will still throw Thinner around if you redeem it, making it harder to redeem any other Blotlings. Redeeming it can be useful if you're facing a Beetleworx, however, as it can thin their armour. After Mickey defeats the Shadow Blot, Sweepers have red eyes and more health, making them harder to combat, although the same strategies should still apply. 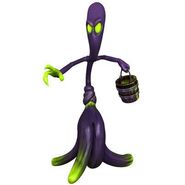 Render of a Sweeper from Epic Mickey 2: The Power of Two.

Render of a Sweeper from Epic Mickey 2: The Power of Two with background.

Sweeper in Epic Mickey 2: The Power of 2.

In-game model of a Sweeper. 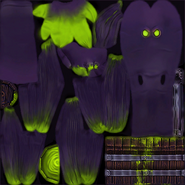