Telephone is a character from Thru the Mirror. They can be found at OsTown in Mickey's house.

Before Mickey's arrival, he got in an argument with Gremlin Prescott, which ended with Prescott stuck in the safe above the Gag Factory, and Telephone having his wrench.

1. On the side of Mickey's house, already filled in

2. Under Clarabelle's garden, use thinner to go underground

3. On the roof of the Gag Factory

4. Hidden behind the painted wall near the Gag Factory

After these have been painted in, Telephone will give Mickey the wrench, and ask Mickey to look for a telephone on Mickeyjunk Mountain (the one near the pile of video game cartridges), and type in 726 so he can extend his communication in Wasteland. Once these are done, Mickey will get E-Tickets and a Bronze pin from her.

Telephone reappears in Epic Mickey 2: The Power of Two inside Mickey's house in OsTown, and is now a female instead of a male. As in the prequel, she gives the player a quest that involves painting telephone boxes, but the main difference is that in the sequel, the five hub worlds (Mean Street South, Mean Street North, OsTown, Bog Easy, and Ventureland) have three boxes to be painted in.

Telephone from thru the mirror 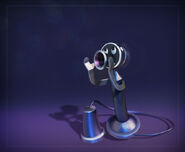 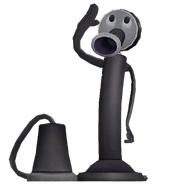 Add a photo to this gallery
Retrieved from "https://epicmickey.fandom.com/wiki/Telephone?oldid=37656"
Community content is available under CC-BY-SA unless otherwise noted.