The Band Concert is a Projector Screen level in Epic Mickey 2: The Power of Two that leads to OsTown and Prescott's Mech. However, the projector to OsTown cannot be active until the Projector Simulator in Rainbow Falls is fixed. Until then, the player is forced to take the Dahl Engineering Corridors to OsTown and tell Gremlin Prescott himself, the one who sabotaged this and other projectors in Wasteland. The short was released in 1935 and is the first Mickey Mouse cartoon in full color.

Conductor Mickey and his band perform a concert in the park despite interruptions by vendor/impromptu flute player Donald Duck, a bee, and a destructive tornado.

As you enter the projector screen to OsTown (after fixing the screens), you come across a band concert in progress. Make your way through some audience members and across the bandstand where the music is being played. At the end of the grounds where the band is played, jump over a brick wall.

Now you find yourself approaching a house. In the background, the sky has darkened significantly. As you come up on the house, watch out. Wind will randomly kick up and try to blow you backward. In the background, during this time, a tornado passes by. From the top of the brick wall, jump onto some tree branches swaying and bending backward in the wind, then double-jump from there to grab the "Band Concert" V1 Film Reel. Then jump onto the roof of the house, which is bending backward in the wind. From there, jump into the house chimney. You find yourself inside the house, where the projector screen to OsTown is found.

As you enter the second projector from the Floatyard to Prescott's Arena, you will come across a destroyed area caused by the tornado. In the beginning, the tornado can be seen in the background but will not effect the player. Although, be careful - the tornado will fling objects to the ground that can damage Mickey (similar to the falling notes in Music Land). Some of the members of the band can be seen scattered around the area struggling to escape.

Poster for the original short film

A ride in Disney's Paradise Pier based on The Band Concert. 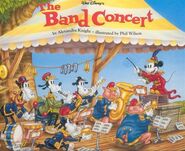 A children's book based on The Band Concert.
Add a photo to this gallery

Retrieved from "https://epicmickey.fandom.com/wiki/The_Band_Concert?oldid=33426"
Community content is available under CC-BY-SA unless otherwise noted.