Notice: This article contains spoilers. Read at your own risk.

This article is about the Blot, the main antagonist of the game and the final boss. For other uses of the word "Blot", see Blot (Disambiguation).

The Blot (not to be confused with the Phantom Blot) is the main antagonist of Epic Mickey and acts as its final boss. It was formed with a mixture of Paint and Thinner. Its lack of a defined shape or definition as a cartoon character - including the love of an audience - has made it a hungry force of nature, craving the things it was denied. The Blot cannot be befriended with paint or destroyed with thinner and is the most dangerous enemy. Thinner does, however, cause the Blot to temporarily melt, as seen in the game's intro, but can later reform into its original state. The Blot was destroyed by the fireworks of Dark Beauty Castle, making it one of the very few blot-based creatures to be destroyed physically.

He is voiced by Frank Welker.

A long time ago, Mickey Mouse inadvertently discovered the workshop of Yen Sid, where the sorcerer was finished creating a world where his lost and forgotten creations would feel at home. However, after waiting for Yen Sid to leave, Mickey takes a closer look at the model of said world, where he uses a paintbrush to create a small model of himself. The model turns black and melts slightly, so Mickey, believing more paint will make it more lively, keeps making it bigger and bigger until it forms into the Blot, a demonic monstrosity who tries to attack Mickey, but the mouse accidentally spills paint on the model and grabs a sponge and splashes the Blot with thinner, seemingly erasing the beast. Hearing Yen Sid approaching, Mickey tries to clean up (in vain) and accidentally knocks over the paint thinner onto the world model. He escapes through the magic mirror to his home, believing this will all just be a silly memory. Unfortunately, part of the Blot was still in the sponge, and it escapes through a portal that was created by the Thinner into the world Yen Sid created.

Upon its arrival in the Wasteland, the Blot would become a major threat as it began to ruthlessly absorb the paint of various toons, leaving only thin, inert husks in its wake. Having no real heart, it hungrily tried to gain power instead. Oswald the Lucky Rabbit stepped up to defend his world from this menace, and the Blot Wars began.

Unfortunately, the Blot wins, partially due to the Mad Doctor's betrayal of his comrades. However, Oswald and his wife, Ortensia, refused to give up. They fought the Blot again on Mickeyjunk Mountain. Using the newly-repaired Thinner Jug, the two attempt to trap the Blot inside. However, Ortensia sacrificed herself protecting Oswald from the Blot and is turned into an inert statue. Oswald finally seals the Jug with a cork, imprisoning the Blot.

Sadly, this isn't the end of the ordeal. The Blot isn't completely sealed. This allows it to spawn countless minions, including a second-in-command. Oswald finally surrenders, devoting himself to guard the Jug, making sure the true Blot never escapes.

After defeating the Shadow Blot at Mickeyjunk Mountain, Mickey and Gus rush to the mountain's peak to help Oswald seal the blot in the Jug. There Oswald reveals that the Blot they fought was just a very big drip from the real Blot. He tells them that when the Blot first arrived, he and Ortensia managed to seal it in the Jug, but Ortensia was lost in the process. Oswald then asks Mickey to be friends. However, before they could shake hands, Mickey sadly reveals that he was the cause of the Thinner Disaster. This makes the already jealous Oswald angry and he jumps on the Jug's cork, ready to fight Mickey. However, as he moves, the cork begins to crack, and bursts open, freeing the Blot. The Blot promptly grabs Oswald and Gus and demands that Mickey surrender his heart. Not wanting his friends to die from either not having the ability to breathe, or the Blot crushing them, Mickey agrees to this. Now energized with Mickey's heart, the Blot creates his Bloticles and begins to drain all of the paint out of the Wasteland.

Mickey and Gus manage to destroy the bloticles, while Oswald fixed the rocket. Once all the bloticles were destroyed, they decide to use the rocket to reach the Blot and use the rocket's self-destruct feature near Mickey's heart. However, the Blot uses its bloticles to destroy the rocket (as it was made of paint due to budget issues), and the Rocket crashes into Dark Beauty Castle. Luckily, Oswald has a plan to launch three sets of fireworks at the Blot. Mickey manages to activate all three fireworks sets while Oswald distracts the Blot, but just as they are ready to launch them, the Blot swallows Oswald and Gus, forcing Mickey to jump into the Blot to save them. While inside the Blot, Mickey reunites with Gus, and they find Mickey's heart, where it's revealed that once the Blot regains its strength, it will use Mickey's heart to enter his world. Mickey manages to free his heart by destroying the bloticles holding it suspended. Oswald grabs Mickey's heart, but after a brief moment's hesitation, willingly gives it to Mickey. Oswald then activates the fireworks, destroying the Blot once and for all. The Blot's destruction results in a rain of paint that undoes the damage done to Wasteland and revives Ortensia.

The Blot briefly appears in the introduction of Epic Mickey 2: The Power of Two in Yen Sid's flashback of Mickey's heroic acts last time in Wasteland (Epic Mickey). The destruction of the Blot is revealed to have resulted in the creation of additional Blotlings throughout Wasteland. While many are congregated in areas like Blot Alley, some are employed controlling the Mad Doctor's new Beetleworx, now called Blotworx. The original Blot also has an entire location dedicated to him and his second-in-command, run by Abe, and created by Gremlin Prescott. He also appears briefly as an illusion in the Mad Doctor's sympathetic song, "I'm Falling Apart" after you defeat the Blotworx Dragon. He is mentioned therefore after that.

The Blot isn't fought directly, rather you fight parts of him. These parts are called Bloticles, and they are in every hub world in the game, Mean Street included. The tentacles will frequently grow boils, and Mickey must use Thinner or Paint (it doesn't matter which) on these boils in order to destroy them. Continue doing this to every Bloticle in every hub world to initiate the last two phases of the triumphant fight to the finish. While the Bloticles absorb all the Paint in whichever hub world they are in, this does give you the advantage to find all of the hidden areas the Paint previously had covered up.

Oswald has another plan: Using the castle's fireworks to defeat the Blot. But in order to do so, the fireworks on each tower must be activated. To activate a set of fireworks, Mickey must activate the tower's three gargoyles by spinning them so they will face the floating crystal in the center and painting the faces to activate them. But Mickey must beware as the Blot will attack him with its claws while he does so, and he can deal heavy damage. After activating all three fireworks sets, the stage is set for the final showdown. This is how the Blot is destroyed by Oswald.

The Blot has swallowed Oswald and Gus, forcing Mickey to venture into the Blot to save them. Upon venturing deeper into the Blot, Mickey reunites with Gus and they discover Mickey's heart and realize the Blot plans to use Mickey's heart to enter his world once it regains its strength. To defeat the Blot, Mickey must destroy all four bloticles suspending Mickey's heart. This is similar to the previous battles in the hub worlds, but now you face dark remains of characters who were consumed by the Blot. These new enemies cannot be defeated but will die when a bloticle is destroyed. Once all four bloticles are destroyed, Oswald launches the fireworks and this destroys the Shadow Blot.

Early on in development, the Blot was referred to as the Phantom Blot, the name of the 1930's comic character. Though the name was changed, some inspiration from the original character still remains. Many concept art pieces depict a larger, more devilish Blot with glowing red eyes as opposed to the typical green ones. Some pieces depicted him with a more skeletal form, while others showed him with a variety of animal-like features such as dragon wings and tentacles.

"The most devastating enemy ever unleashed upon Wasteland, the Blot is more than just a garden-variety villain. The Blot is practically a force of nature, rampaging at will through Wasteland and inflicting carnage and catastrophe wherever he (it?) goes. Whether he's sucking the color out of the world, or transforming its inhabitants into lifeless slabs of stone, the Blot is out of control and it would seem that nothing, and no one, could possibly stop him. Nothing except for, maybe, a determined mouse wielding a magical paintbrush." 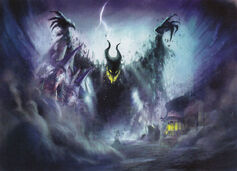 The Blot in action. 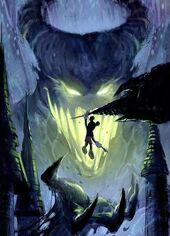 Another piece of artwork for the Blot.

The real Blot after being unleashed from his "prison."

The Blot after retrieving Mickey's Heart. 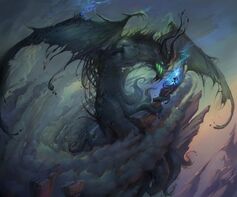 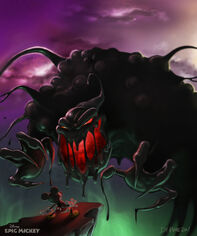 Concept art of Mickey encountering an early design of the Blot. 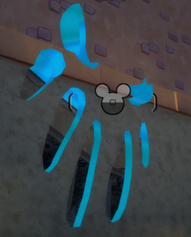 The Blot's face in Epic Mickey 2 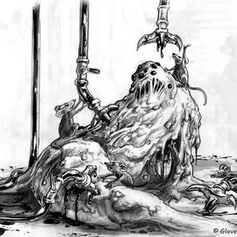 A creepy version of the Blot. What were they thinking?!? 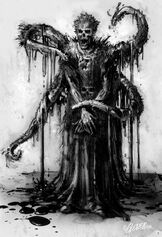 A terrifying version of the Blot.
Add a photo to this gallery

Retrieved from "https://epicmickey.fandom.com/wiki/The_Blot?oldid=32806"
Community content is available under CC-BY-SA unless otherwise noted.