The Peddler is a character from the Disney film Aladdin. He makes his first appearance in Epic Mickey: Power of Illusion.

Like the other toons, he has been sucked into Cartoon Wasteland by Mizrabel, who has trapped him in her Castle of Illusion. Mickey will need to rescue him from the Cave of Wonders: Inner Reaches. After he has done so, the Peddler will return to the Fortress, set up his own room, and, like Scrooge McDuck, will eventually open up his own shop. 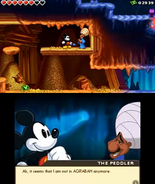 The Peddler talks to Mickey.

The Peddler as seen in the movie Aladdin.
Add a photo to this gallery
Retrieved from "https://epicmickey.fandom.com/wiki/The_Peddler?oldid=32992"
Community content is available under CC-BY-SA unless otherwise noted.