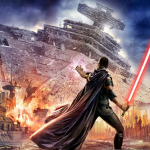 I had a long description about the gameplay of this cooler final battle that took me 2 HOURS to write but my laptop didn't save it so I'll just write a few of the best parts. The battle would take place in the even MORE destroyed Dark Beauty Castle courtyard. The Blot would stay behind the giant tower that fell and blocked your path in the first place. At the end of the battle the Mad Doctor comes in during a 3D ending cutscene and starts his own battle with the Blot.

I would be on board with this epic level to return but I do know about the Time Constraints bull crap. I do not get it though. I counted over 30 different areas in the first game yet only 22 in EM2. I know they have Autotopia but it isn't the same. No Space Voyage or Tomorrow Square is a thing that made EM2 a sort of flop.

Okay, THIS is an idea to bring up. I know that they mention that the mountain was claimed destroyed on the wiki but was it ever clearly said in the game. I think that instead of the D.E.C. leading to rainbow caverns it leads to Mickeyjunk Mountain. While there you have to repair a contraption similar to the substation. The overall quake destruction is devastating. After repairing the projectors you continue on to the gulch. Then on a return visit to Ostown a firework dispenser appears. You can bring them back to the cave-in site and light them off. Now you have both a D.E.C. and a projector there.

In the second game many areas from the first game were cut out. We all know this. So where was the Gremlin World? My opinion on this topic is that the quake completely destroyed it. It may be a sad opinion but we have to face the facts. Small Pete is in Rainbow Falls, Mean Street cracked in half and Dark Beauty Castle crumbled which were probably more reinforced than the Gremlin World. Plus nobody even talks about anyway so it's gotta be true. Who knows, maybe it just got up and walked away. Maybe this is why there are so many gremlins in other areas.

I normally talk about the second game so lets change things up. This may be an opinion that you might disagree with but I think the battle with the Shadow Blot should have been a little more direct. This is how I think the battle should have gone. After Oswald tries to shake Mickeys hand at the control tower and the Blot grabs Oswald's hand and picks him up like it did in the original game but then it tears the room apart and then the battle starts. The Blot shoots you behind what used to be the projector you used to get there in the first place. It summons three Bloticles and uses them to block your path. After you take them out you have to thin out a toon pulley which drops a pile of rubble on the Blot. It launches you back and summons 3 more Bloticles to block your path. After you repeat this process 3 times a hole opens in it's chest for you to go in. The opening closes behind you trapping you in and bringing you back to the inside of the blot level.

I know I say some not so nice opinions on some of the levels in the game but I just have an important opinion on this topic. Rainbow Caverns in a cool level and all but still it had a few flaws. First of all, even after you repair the substation there is STILL no projector to the area. Then there was the Slobber flood glitch. I used Beccas pin bags and just needed one more pin from Moody and Rigger Greene. I got to the substation and a Slobber got in my way. Not really a problem until 5 MORE appeared. Then it just got ridicules with 35 MORE Slobbers. That made my Wii crash. No matter what I did nothing happened. I had to DELETE that saved game and now I couldn't get the last pin and get the complete collection. You can see why I dislike that area.

I was recently playing the first game and when I was dueling off the Bloticles in Bog Easy I found that Slobber that appears once in a while there. This was an EXTREMLY ANNOYING STUPID BULLCRAP GLITCH!!!!! I started battling it until it clawed me. I went flying. I went through the wall by the boat and kept going. I do not know how I didn't break a single world record. I landed at the projector... AT THE DARK BEAUTY CASTLE COURTYARD!!!!! I had to play through the whole game ALL OVER AGAIN!!!!! Then there was this one time I was on my first visit to Mean Street. All of a sudden after Gus does his thing in the beginning cutscene ANOTHER CUTSCENE STARTS!!!!! This one started with a shot of the Blot above Mean Street. I was at the end of the game. HOW THE HECK WAS I ALREADY AT THE END OF THE GAME!?!?!?!?! I took a nearby projector to Ostown to see if I could do the game in reverse. Stupid, Stupid, STUPID!!!!! Once there the screen went black and both the Blot theme and the Ostown music were playing. I had to delete that entire account. Has anyone else had these glitches? Let me know at my talk page. Bye.

Where Did The Robot Dog Go?

I have a theory about where the Robot dog went. Since it was most likely part of Tomorrow city, I think it went to Autotopia. The way it got there? Secret projector screen. When I was playing the second game I had to collect an item for Copernicus. In the tunnel I found the item at there was a huge amount of debris blocking the other two ends of the tunnel. And who is there to say that the tunnel was not an Autotopia to Tomorrow City projector screen containing tunnel. And if you want to know where I think the Projector to Autotopia from Tomorrow City was well I have a good guess on that end to. After the first battle against the slobber the device turns and reveals Mister Rover. There is two different ways the device turns. Since Mister Rover is the person who owns the dog, maybe the dog uses another unknown, unseen projector the device also turns to. How is that for a theory?

I am now going to talk about a few cool glitches. First there is the 3D city hall glitch which works on all of the bunny roundup quests. After you have all the bunny's near the pipe, do a spin move right by the city hall door and knock the bunny children toward the pipe. Quickly get in before the last one gets sucked up. If you go fast enough then Gus will show a shot of the buildings exterior and the building is now 3D and you can use Paint and Thinner inside. The affect cancels if you talk to Pete or leave and then enter again.

Hidden Ways to do Quests

You guys may know how to do all of the quests, but I know a few secret ways. First of all is the gather the flowers quest. As Clarabelle mentions, You can get the flowers on Mean Street. Judging by how the page on this quest was when I first joined the wiki, I am guessing that everyone thought that was just a mistake by the developers. Well they were wrong with a capital W-R-O-N-G. I found out that the thinnable trees on Mean Street are hiding three flowers. How many of you knew that.

Where Did the Seers Go?

In the first game, the first of the blotlings that you have to fight is the Seers. Then the Blot gets blown up. They are never seen again. So where were they in the second game? Personally I don't believe that they just disappeared because the Blot was dead. But if it wasn't that then what was it? I have two theory's. Theory one. They were in an area you don't go to in the second game. Although this seems like a stupid theory it could be possible. You don't go to Tomorrow City, Tortooga, the lower floors of Lonesome Manor, or a collection of sections from Dark Beauty Castle in the second game. They could have been in any of those places. OR, we could consider the second theory, they became Dropwings. This also makes sense. They could have morphed in a weird way. The False Shadow Blot was a tougher version of a Slobber. Dropwings could have been alternate types of Seers. Where do you think they were? Ask in my talk page.

Similar to Breath of the Wild

Hello everyone! It's me, for the first time in a few years, I have decided to return the the old account I once used and continue my edits. To start off, I have to post my opinion online. The similarities between Epic Mickey and the other best game I ever played, Legend of Zelda: Breath of the Wild. I am not a fan realy of the Zelda series, but a couple of months ago, my dad gave me a switch with some games, and I immediatly found another game that I loved, Breath of the Wild. As I played through, I started to notice an uncanny amount of similarities. For starters, when you talk to some people in that game, most of the time they use Bark-talk for voice acting outside of cutscenes. Also, they have an ink monster much like this game (Calamity Ganon in BotW and the Blot in here). In both games, you fight the final boss at a castle. I also noticed both games use the term "guardians", and have a quest that you technically don't get ti visably, on screen beat (Destroy Ganon in BotW and Return Home in Epic Mickey). Both games have you fight one boss, (Calamity Ganon in BotW and the False Shadow Blot in Epic Mickey) before fighting a bigger, not tougher, boss almost immediatly afterwards (Dark Beast Ganon in Botw and the Real Blot in this game). Finally, to finish this off, there are secret treasure chests hidden in different areas and some have different styles, such as the blue chests vs the red ones in this game, and the metal chests vs the old nonmetal ones in that game, also the DLC chests in BotW. Did I miss any other similarities that you readers notice, let me know!

I'm Lucas. I have played Epic Mickey the second game came out. It used to be my favorite video game until I played Star Wars The Force Unleashed. I'm a master at the first game. I have every collectable except for a stupid bronze pin. Normally I choose the path with better rewards.

Hello, I am back. I have been using a different account because I would not be caught dead on the intense talk sections with some stupid name I chose as a dare from a freind I have not talked to since ending middle school. Long story short, I'm back and better than ever. My favorite movie is Shawshank Redemption and my favorite TV show, (other than the Walking Dead) is tied between Two and a Half Men and The Jeffersons. I have become a die-hard Stephan King fan.

Retrieved from "https://epicmickey.fandom.com/wiki/User:Pizzaaaaaaaaaaa?oldid=33691"
Community content is available under CC-BY-SA unless otherwise noted.